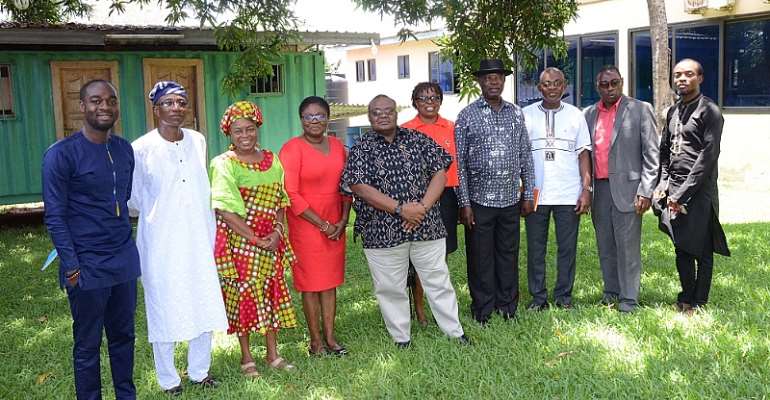 A team of Commissioners from the National Media Commission (NMC) yesterday visited Western Publications Limited (WPL), publishers of DAILY GUIDE, to familiarize themselves with the running of Ghana's most read private newspaper.

The commission commended the newspaper for its quality and the changes it has undergone over the years, urging the managers to continue to keep their eyes on the ball in their quest to achieve more laurels.

The team was led by Dr. Doris Yaa Dartey, a seasoned journalist, and they took time to explain the mandate of the NMC as well as solicit views on how media houses could help the commission to bring sanity onto the media scene.

Dr. Dartey said the NMC had set up a Media Monitoring Unit with funds from the European Union and that the unit was preparing “Consolidated state of the media” reports which would help to improve media standards in the country.

She said the commission had also set up what she called Regional Media Advisory Committees in a number of regions to monitor the media landscape on its behalf; but bemoaned the lack of funds for the commission to execute its mandate.

“We have not been able to cover the whole country due to lack of funds. If the NMC continues to remain an Accra entity you cannot expect it to be strong to monitor a fast expanding media landscape.”

She said worriedly, “People volunteer to work for the NMC in the regions.”

During the meeting, interesting topics such as the manner in which the commission handles complaints, the commission's relationship with media houses, among others, came up and the commissioners, including Nana Addo Gyau Akabisa II, William Orleans Oduro and Kakra Essamuah, took turns to explain issues.

Editor of DAILY GUIDE, Fortune Alimi for instance, sought to know what the commission was doing to correct public perception that it is only 'targeting' a few media houses for sanctions whilst many errant newspapers continue to operate with impunity.

The need for the commission to enhance its public presence also came up strongly and the thorny issue of newspaper reviews by radio stations was also discussed.

Kwame Blay, Business Development Director of WPL, said DAILY GUIDE would continue to collaborate with the NMC to help bring sanity to the medial landscape.

“There is no malice in what we do. We attach professionalism to everything we put out and issues are discussed dispassionately before we come out with our final product,” he underscored.