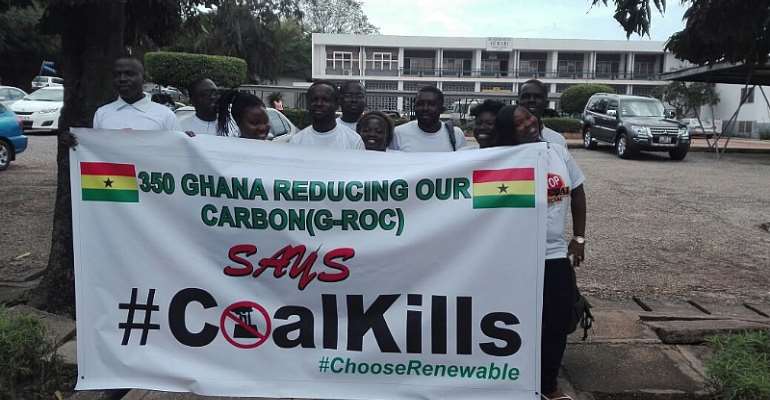 A civil society group, 350 Ghana Reducing Our Carbon (G- ROC), is calling on government to consider using renewable energies such as wind, solar and biogas to augment the country's current energy capacity rather than coal-fueled plants.

According to them, coal has severe negative environmental, health, and social impact on humans.

The group raised the concern following a publication by Volta River Authority (VRA) in January this year, announcing government's intention to collaborate with the Shenzhen Energy Group Co., Ltd. of China (SEC) to develop a 2×350MW super-critical coal-fired generating units including affiliated coal handling terminal, at Ekumfi in the Central Region.

The plant is estimated to cost about US$1.5 billion dollars to be financed by the Chinese-Africa Development (CAD) Fund. But speaking to Citi News, Coordinator for 350 G-ROC, Chibeze Ezekiel, said Ghana must take a cue from other countries that have suffered serious negative effects using coal power.

“In India, one hundred and fifteen thousand people die every year as a result of coal which is costing the government $4.6million; a lot of death because there is a component  in coal emission that's mercury. We think that the devastating effect of coal is not appropriate for our country” he said.

He added that; “This is why countries like United States and China are shying away from coal. Our demands are that there are better alternatives which are more efficient and can promise jobs such as renewable energies, we have enough sunlight, wind, biogas which are available and natural that we can use to harness energy. We are calling on government to stop the coal dream and focus on renewable energies.”

'Coal plant project to commence in 2017'
The Volta River Authority (VRA), says the 1.5 billion dollars coal power plant scheduled to be built would commerce in April 2017 . The Authority said, a total of about two million tonnes of coal would be imported from Colombia and South Africa every year; more than the 25-year lifespan of the project and the construction of the plant would also include a new coal port to receive the coal.

Mr Jacob Brown Yawson, Manager of Technical Services, VRA at Aboadze, in an interview with the Ghana News Agency in Accra, said in December 2015, VRA and Shenzhen released a pre-feasibility environmental and social impact assessment for phase I: 2x350MW supercritical coal plant, including an affiliated coal handling terminal, while Phase II would be a 4X350MW or 2X600MW supercritical coal plant.

He said the key risk in the energy sector is fuel supply and that there is the need to diversify the energy sources since the country could not rely on one traditional source.