Paris to host international meeting on Libya next week 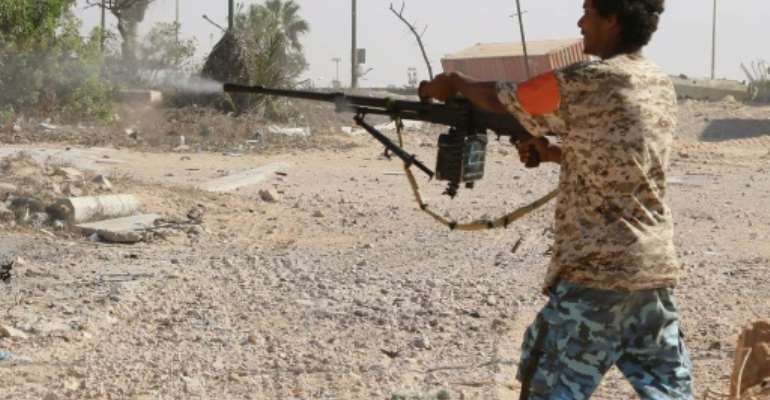 A Libyan pro-regime fighter with the Government of National Accord (GNA) fires at Islamic State jihadists during clashes for control of Sirte, on September 3, 2016. By Mahmud Turkia (AFP/File)

Paris (AFP) - France will host an international meeting on strife-ridden Libya next week featuring several countries in the region including Egypt and Gulf states, the French government's spokesman said.

Foreign Minister Jean-Marc Ayrault told a cabinet meeting the gathering would bring together countries including Egypt, Qatar, the United Arab Emirates and Turkey "to see how we can advance the cause of achieving the necessary unity in Libya", spokesman Stephane Le Foll said.

Sarraj told AFP in an interview that military strongman Khalifa Haftar, who controls the north African country's main oil ports, should be represented in a new, more inclusive government.

"We have no other choice but dialogue and reconciliation," Sarraj said.

"No one wants an escalation or a confrontation between Libyans," he added.

Sarraj's fragile unity government, formed in March following a UN-backed deal in December 2015, is backed by the international community.

But the Government of National Accord (GNA) has struggled to impose its power across a country riven by violence since the fall of dictator Moamer Kadhafi in 2011.

Libya has Africa's largest oil reserves, estimated at 48 billion barrels, but production and exports have slumped dramatically after years of crisis.

“Even those who lost elections are thanking people, what are...
12 minutes ago

Komenda Sugar factory 'collapsed' under Mahama; if not, why ...
12 minutes ago