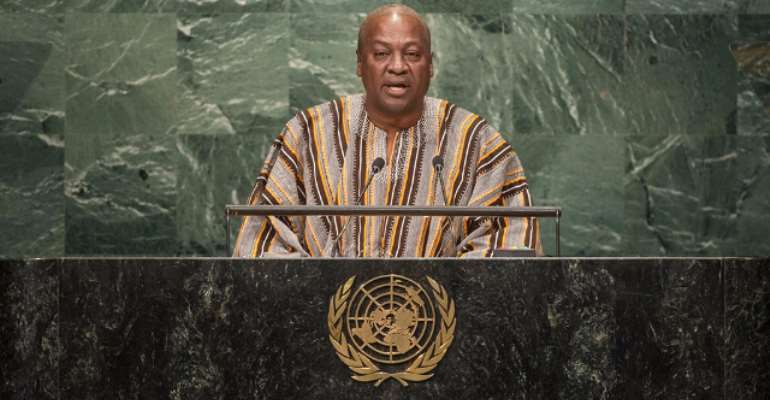 The joy of many Ghanaians across political divide knew no bounds when Mr. John Dramani Mahama was selected as a vice presidential candidate of the then candidate: Professor John Evans Atta Mills of President Rawlings’ fashioned National Democratic Congress (NDC) in April 2008. As an astute politician and a member of Ghana’s legislature through the nod of Bole-Bamboi constituents, Mr. Mahama was affable, not disconcerting, simple and noble. He is best remembered for his role in seeking justices for 44 Ghanaians who were murdered by the iron fisted Gambian ruler, Yahya Jammeh at pan African parliament in somewhere 2005.

Indeed, he was a great legislator and posterity will judge him greater still. However, as a president, his image is sinking fast like a butter on top of a fire partly because of his preference for kakistocracy (a system of government by the worst or least qualified citizens). Here, confusion interposes because not all his appointees are least qualified and bereft of ideas to manage their portfolios. I am much particular about the likes of those from dining hall prefect work experience to a minister of state position. The price to pay for President Mahama’s somewhat lack of derision for kakistocracy, is the number of embarrassments his government has caused Ghanaians in both national level and international arena.

For example, during Ghana’s 59th independence anniversary, Kenyan President, Mr. Uhuru Kenyatta was referred to as the President of Ghana in a brochure prepared by some of his appointees. The famous “Vikileak” is another example. In his speech to address the 71st session of the UN general assembly, Mr. Mahama raised many issues. Three of them are worthy for discussion.

In the first place, Mr. Mahama’s call for USA to completely lift economic blockade on Cuba was a needless diplomatic or ego aggrandizement. This was like shutting the stable door after the horse has bolted. President Obama made a historic trip to Cuba in May, 2016 and Delta airlines has already began flight to Cuba. So Mr. Mahama’s call was unnecessary interference in the foreign policies of Cuba and USA. Ghana was supposed to be neutral.

1.All member states are sovereign and equal.
2. All are pledged to fulfill their obligations under the Charter in good faith.

3. All are pledged to settle their international disputes by peaceful means and without endangering international peace, security and justice.

4. They are to refrain in their international relations from the threat or use of force against any other state.

5. They are to give the UN every assistance in any action it takes in accordance with the Charter.

6. The United Nations shall not intervene in matters which are essentially domestic ones of any state except when it is acting to enforce international peace.

Fellow countrymen, why must our president drag Ghana into the relations between USA and Cuba? What actually plunged me into a state of mental disquietude was when President Mahama told President Obama to complete the total process before he leaves office. USA-Cuban relationship is a serious debate between the Democrats and the Republicans and it was not appropriate for Ghana to interfere in USA’s politics. Those who wrote Mr. Mahama’s speech must be answering some questions.

One would have thought President Mahama could use such platforms to ask for help to lift economic and social blockades he and other presidents have bequeathed to the citizens of Ghana. Issues like energy crises, youth unemployment, education and health should have been prioritized on such platforms. The bifurcation of Ghana on political lines is so severe that it is no respecta of life. For example, Professor, Kwabena Frimpong-Boateng who established the national cardiothoracic center had been kicked out of Korle Bu Teaching Hospital because he is not part of the ruling government. A president who dislikes a health care blockade on his citizens would have partnered with the accomplished physician to set up cardio centers throughout the country.

What is the doctor-patient ration in Cuba as compared to Ghana? Cuba under trade blockade leads in Doctor-Patient ratio. Cuba leads the world with the lowest patient to doctor ratio, 155:1, while the U.S. trails way behind at 396:1.[6] With a surplus of Cuban doctors, Cuba is able to help ailing nations around the world. They have medical missions in over 75 different countries lead by nearly 40,000 health professionals, almost half of them are doctors.[7] The United States by contrast imports doctors from poorer countries, further contributing to the brain drain of professionals from poorer countries to rich ones. In Cuba education is free. Room and board, books and amenities are included. Doctors are not burdened by student loans and live comfortably though not extravagantly. http://www.socialmedicine.org/2012/07/30/about/cuba-leads-the-world-in-lowest-patient-per-doctor-ratio-how-do-they-do-it/

All is not well in Ghana and our leaders must be transparent about the problems in Ghana. BNI has been causing arbitrary arrest in the country. BNI intentionally arrest on Fridays and argue they don’t work on weekends. Although I disagree with some of the content of Mr. Fadi Dabboussi’s articles, BNI must avoid this kind of constitutional lawlessness. If you don’t work on weekends, don’t arrest on Fridays. I am curious to know, is it a job of BNI to hunt for those who defame others? President Mahama per his experience is over qualified for the job, but his problem is his appointments.

Feedbacks must be directed to [email protected]