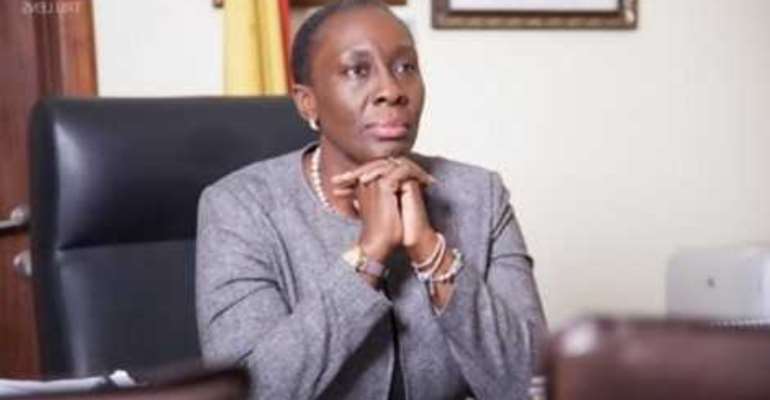 They may look nice, both in stature and in character, they may be endowed with all the ‘back goods’ and the succulent ‘upper fronts’, smooth skins and sexy eyes, but woe unto men who falls into their net; unless one is ready to siphon all his lifetime savings to battle rape allegations in court, or better still be ready to be held at ransom.

Mr. Nicholas Mensah Woode is a Tema based businessman whose hard work in pharmaceutical supplies for the past years hard earned him the accolade ‘doctor’ by his clients and friends until his unfortunate love affair with a 22 year old student of the Central University College, in Accra, Ernestina Edusah, almost cost him his hard earned reputation, after he had refused to succumb to extortion and profligate spending.

Somewhere in the early part of February 2014 Mr. Mensah met a certain Ewoenam whose real identity later became Ernestina Edusah at community 1, infront of the Tema Metropolitan Assembly, where she tapped the latter on the shoulder, standing by his car, after mistaking him as someone she knew.

In the next minute, Ernestina apologized, and after a lengthy chat contact numbers were exchanged.

From the conversation that ensued, it came to light that Ernestina was a student of the Central University reading nursing.

Coincidentally Mr. Mensah also lived around that area, so he obliged to give her a lift upon her request.

Immediately Ernestina got to her hostel, she called to show her appreciation and further asked when she could visit him (Mr. Mensah)

Two days later, she called to complain why Mr. Mensah had not been in touch despite advancing her number to him.

According to Police statement “The accused retorted he was very busy attending to emergencies at the time.

The complainant subsequently asked for the leisure times of the accused so she could pay him a visit.

The accused intimated to her that he is normally available on weekends from there both the accused and the complainant met at different times on different places.

Eventually the complainant started visiting the accused in his house.

The accused reciprocated by returning the visit to the complainant at her hostel.

The complainant visited the accused on about three different occasions where she spent the night with the accused in his house.

Out of these three visitations, the parties had intimate sex on two occasions on a mutual consent.

Then on the complainant’s fourth visit, to the accused house, on the 15th day of July 2014, at here own instance after calling that she had missed the accused.

The complainant had call to enquire when the accused would be available at home.

The accused informed her that 8; 30pm and the complainant agreed that she could pick her at a nearby filling station around the motorway to the house.

When they got home the complainant went to the kitchen to pick a drink from the refrigerator at the kitchen, whilst the accused went to change over his clothes in the bedroom.

The complainant in the course of taking the drink started talking about her financial challenge which she requested for assistance from the accused.

She divulge to the accused that she needed some money to furnish her newly rented apartment , the accused promised giving her the money the next day after close of work (that was 16th July 2014).

The complainant insisted she needed the money to shop in Accra before the close of the day, a suggestion the accused found not possible.

Around 10;30 pm, the accused impressed upon the complainant to be dropped off at her hostel, because it was getting late.

The accused made that move because he realized the complainant purposely came there for the money.

The complainant insisted she would pass the night in the house of the accused because it was late and the hostel would be locked up by then.

The complainant changed into her nakedness with only her brazier left on, whilst the accused was talking care of his security gadgets and dogs.

They both slept off on the same bed.
Around 12; 30 to 1am, she woke the accused up and demanded to know, if it was the money she asked for that was why the accused was not touching her.

Following from that the complainant made advances towards the accused which eventually culminated into a mutually agreeable sexual intercourse between them.

The next morning around 6am, the accused drove the complainant the same spot she picked her the previous day.

The accused gave the complainant GH90 to pick a taxi to the hostel.

The complainant called the accused upon reaching the hostel, and thanked him for his hospitality and the promise of assisting to furnish her newly rented room.

The complainant then later in the day called about seven different times to ascertain whether the money she requested was ready.

The accused informed her to exercise patience as he was mobilizing resources to help her out, a suggestion which did not go down well with the complainant.

The complainant’s immediate reaction was “is that so?”, “ok you will see where power lies”.

Consequently a follow up call came swiftly from one ASP, Olivia Turkson who informed the accused about a lady haven lodged a complaint against him at the Tema Harbor Police Station and therefore the accused should come to her private residence to map up means of settlement at the Community 8; after giving the accused direction to her house.

The accused who was in Accra all day got to Tema around 8:30 pm, returned the call of the Police Officer, Madam Olivia Turkson.

Upon the return of the call, Olivia Turkson asked him to see her the next morning as she was in a meeting with some people at her residence.

Early morning the next day, somewhere around 8am, Olivia Turkson again called the accused to avail himself in her office at the Harbor Police Station, for a meeting with the complainant.

In view of this, the accused couldn’t honor the said invitation due to unexpected circumstances, and however an official complaint was lodged against him, and subsequently dragged to court.

Interestingly, Ernestina had arranged with one of his ‘lovers’ , a reporter at the Daily GUIDE Newspaper , and immediately the story was blown the next day with deep sensationalism.

However, the Attorney General after careful consideration of the matter, regarding facts and evidences gathered by the police it came to light that the victim had put up lies to gag his lover (Mr. Mensah), after she had failed to extort monies from him.

According to the AG, Nineteen days after the report to the police on18th August,2014 the victim presented a torn khaki pair of trousers: a torn ash-colored blouse and torn pink-colored panties as evidence of rape. Five photographs of the said torn items were also given to the police.

the report said during police investigations it realized inconsistencies in Ernestina’s claims and that of her witness, and that “in the case of C.O.Pvrs Sem(1962)2 G.L.R.77,the supreme court held that there was a three week delay in reporting and as such the story to the victim was not credible.

It is the principal in criminal practice that ALL SEXUAL OFFENCES MUST BE CORROBORATED. The consistency of the story of the victim as well as the report of the event being made at the earliest opportunity is all essentials of corroborating in the offence of rape.

In the instance case, THE VICTIM DID NOT REPORT THE EVENT TO ANY ONE AT THE LEAST OPPORTUNITY. The victim said she was dropped at the roundabout at 4.30am,at the time she could have reported the event to any other person but failed to do so till about 6.30pm, when she told her brother. Accordance to the brother, she was reluctant to tell him but for his persistence. In effect the time intervals after she had the opportunity to report till the eventually lodging of the report the next day on 16th july,2014 at 1.30pm with the police CANNOT CORROBORATE HER STORY. The failures to report the event at the least opportunity by corroborate her story. The failure to report the event at the least opportunity by Ernestina Edusah cannot establish evidence of corroboration.

The medical report is INADMISSIBLE because the event occurred on the night of 14th July 2014 and the victim was examined on the 17th july2014 THREE CLEAR DAYS AFTER THE EVENT. The intervening day interfered with the evidence since the result CANNOT be directly linked to the alleged event of the night of 14th july,2014.

The torn clothes that were presented together with the pictures which were brought to the Police by the victim is more than nineteen (19)days after the event cannot past corroboration. The victim earlier during police interrogation said NON OF HER DRESSES GOT DAMAGED. Added to these, SHE NEVER MENTIONED IN ANY OF HER STATEMENTS THAT ANY OF HERR CLOTHES GOT TORN. The said pieces of evidence are INADMISSIBLE AND CANNOT SERVE AS IN CORROBORATIVE EVIDENENCE.

In conclusion, the story as presented by the victim cannot establish ANY PRIME FACIE AGAINST THE SUSPECT LEFT ALONE PROVE HIS GUILT BEYOND REASONABLE DOUBT. Having failed to establish prima facie evidence, the explanation of the suspect becomes IRRELEVANT.THE SEXUAL INTERCOURSE THAT TOOK PLACE WAS WITH THE CONSENT OF THE VICTIM.

PLEASE, CLOSE YOUR CASE DOCKET FOR LACK OF EVIDENCE TO ESTABLISH ESSENTIAL INGREDIENT OF CONSENT.