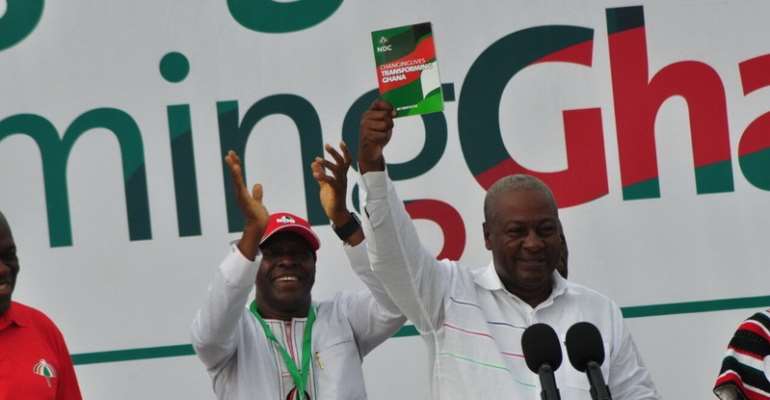 Manifesto equivalence trying to outdo political equivalence.  This is what our last week was all about.

After launching their 2016 manifesto and pointing out how much bigger it was than the NPP document of last year, the NDC party then set out to go head to head with NPP's Bawumia to paint a picture of a liar and unfair analysis of the metrics which they themselves published.

It seems to have failed, the numbers stack up and Paa Kwesi Amissah Arthur is not being allowed to go one on one with the NPP's view, despite his bold offer to challenge all that the NPP side said the week before. As if they know it, the NDC campaign train seems to have decided that any attempt to challenge Dr. Bawumia on a technical level would not be in their best interest.  Not because Bawumia is the only person in this country who has ever pointed out to this government that they clearly are not solving the economic problems, that we are poorer today than we were when they came into office eight years ago, not because Bawumia is any better an economist than Vice President Amissah Arthur, though he could be, if you skew the argument that the head of the NDC economic management team is better and more superior, but for political interference.

But why then are we in this mess?  In the early days of NDC-yore and still to this day, there have been rumours of bad blood between him (the Veep) and Seth Terkper.

The only come back to the argument of “better economics man” would have to be that political interference is killing his initiative.  And I think that is more correct.  The Royal Senchi Resort Fiasco, where I was included, would have set the stage to do all that we identified and suggested as the key insertion event to get fiscal stability resolved and macro indicators improved.  Alas it is now faded in history and hardly gets a mention from the Jubilee House.

Nigeria's President Buhari has asked the international community to come help with the Boko Haram nuisance while Islam itself is rallying round to cut out this canker of terrorists who mushroomed from deliberate misinterpretation and an attempt to give one back to the Western world, based on some contrived ideological stance to satiate the sadistic desires of a motley band of murderers.

At the same side in China however, our President is warning lenders off from our plight whilst at the same time borrowing to the hilt at their largesse.

Kemi Adeosun, is Nigeria's finance minister.  I want her to be my finance minister.  She was on social media explaining why Nigeria has chosen to admit that they are in a full-blown recession, how their economy has failed to grow and diversify and how it is a struggle to achieve financial targets.  But she does it all in simple language and becomes very credible and carries a lot of reassurance that she understands what needs to be done to correct the problems.

Why has Nigeria found leaders who are prepared to do the right things, admit when they are wrong and are doing the right things as far as corruption and governance are concerned?  And we can't imitate?

You would think that there are lessons there for Ghana to learn.  Instead, we have latched on to the small oil and gas potential we have found, ignoring the fact that the commodity is struggling to maintain its dominant fossil position, and might soon not be worth anything; and touting that as achievement despite the statistical facts that show a deteriorating economy.

I am not even sure that any of this manifesto talk has identified the way forward to digging ourselves out of this mess.  Instead, some “teenagers” are telling us that we cannot see the changes and progress achieved because we are sleeping, eyes shut and we are too short to see above the heads of the crowd.

We have let agriculture suffer, despite its answers and enormous potential to solve our wealth and food stability problems, and instead, our energy is directed at attracting more investors into oil and gas on the back of a commodity collapse.

I am still numbed why we do not see that our fortunes sit with a 100% agriculture solution.  We can grow all the food we eat and that which we cannot eat, we can sell.  How best does a developing economy survive if not to first be food-sufficient and after, support ourselves for growth, using the other cash crops and commodities we have been given by nature?  We have land and we have water.

The fact that we have failed to put food on our tables and provide adequate nutrition for children and families, doesn't seem to be a problem for the politicians.  The evidence is clear in the outcome indicators of prices in our markets and the product variety on the supermarket shelves, labelled in language from Lebanon, India, UAE and South Africa.

We don't have supply/demand issues in Ghana and inflation continues to go up.  We have a cost/push challenge catapulted by very high interest rates, fuelled by Government's insatiable appetite for cash.  You should listen to Kemi explain this for the Nigerian economy as well.  Our problems are nearly identical except for the “teenagers” we have in government.  And you know what?  She is far easier on the eyes than our minister of finance.

I have no problem with anyone who chooses to make a business in the FMCG sector.  It is just as legal a business as any other.  But the point is, why am I importing rice when I have the potential to grow enough rice to feed the whole country and some?  Why do I import cartons of fruit juice from countries further away than Nsawam, the Afram Plains and Brong Ahafo Region, when everything I need to meet the demands of Ghanaians is right under my nose?

Why do I think it is not important to develop bauxite and steel reserves when I have an abundance of it, and aluminium in particular as input for building and packaging is so necessary a catalyst for development?  And I can get it done in Tema?

This country is turning 60 next year.  It should be a year when we leap out of the childish commentary that we are still a growing democracy, behaving like teenagers and comparing notes about who built more roads and houses, who built more schools, who provided more freebies and whose GDP is bigger than the other.

Like teenagers who go urinate behind staircases, we are only interested in the size of the tools we have and not the end result of what an exercise such as what we have done has translated into a benefit; that we have used resources to impact the lives of citizens to enable a better life and opportunity to improve further.

When you put “teenagers” at the helm of Government and task them to spend time “setting the records straight”, this is what happens.  Lies about achievement and exaggerating the size of triumph gets you nowhere.

I am not interested in how many kilometres of road you put down.  I want to see what impact you generated and how my fellow citizens in the poorer Upper West of the country have translated a road project into substantial improvement in their lives.  Laying bitumen on land to create a road is just the start.  More of it in comparison to the competition is just teenage talk.