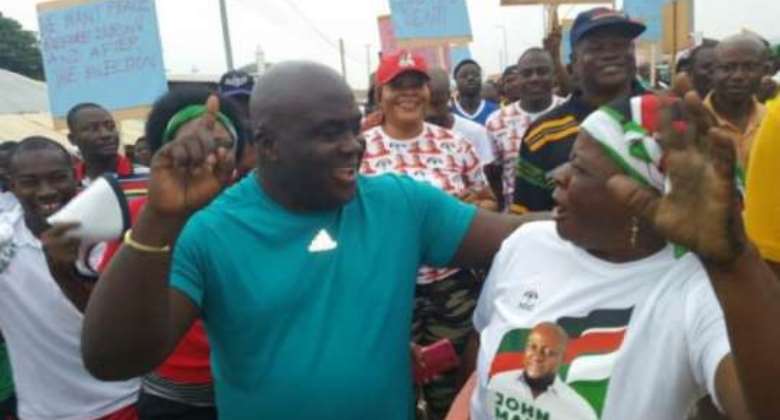 By Prosper K. Kuorsoh, GNA
Wa, Sept. 24, GNA - Mr Julius Debrah, the Chief of Staff, has joined the people of the Upper West Region to embark on a peace walk to promote a free, fair and peaceful elections in December.

The peace walk was organized by the National Road Safety Commission (NRSC) in collaboration with the National Youth Authority (NYA) and the Nandom Secondary School Old Boys Association (NASSOBA).

Participants of the heavily attended peace walk include the Upper West Regional Minister, Alhaji Amidu Sulemana, the National Peace Council (NPC), the Electoral Commission (EC), the Security Agencies, supporters of the various political parties and the media among others.

They carried placards with inscriptions such as 'election is not about life and death', 'give peace a chance in 2016 elections', peace is victory for Ghana' and 'there are no winners in a war' among others.

Addressing the participants at the forecourt of the Upper West Regional Coordinating Council (RCC), the Chief of Staff urged the people to give absolute commitment to peace before, during and after the elections.

'If you have a broken head or a broken nose by engaging in violence, are you sure you can even go to Accra to see the one you fought for to tell him or her that you fought for him and got injured?', he asked.

Mr Debrah urged all to eschew any form of violence and join hands to promote peace in the coming elections, adding that government was committed to ensuring a peaceful atmosphere for the elections.

Mr Emmanuel Danyomah, the Upper West Executive Secretary of the NPC, thanked the political parties for coming out to participate in the peace walk and urged them to continue to educate their people on the need for a peaceful election.

Mr Awudu Issahaq, the National Youth Organiser of the People's National Convention (PNC) urged all political parties to go about their duties devoid of intimidation and violent tendencies.

Mr Samad said there was no peace for one who was lying at the hospital bed because of an accident and appealed to the people to always try and follow road traffic regulations to avoid needless accidents.