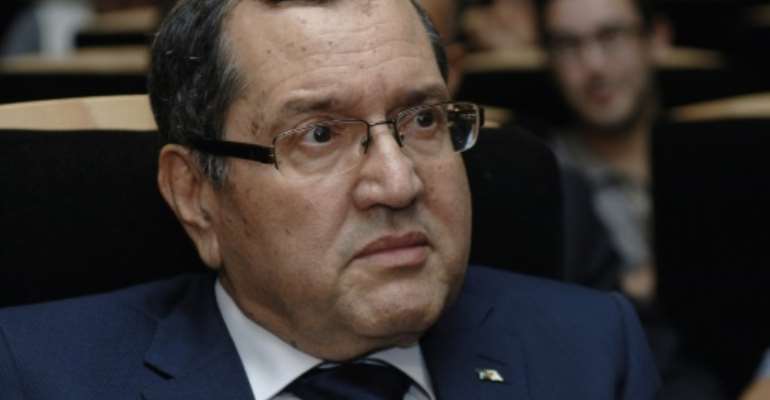 Algerian Energy Minister Noureddine Boutarfa gives a news conference on September 25, 2016, in the capital Algiers on the eve of the three-day International Energy Forum and an informal meeting of OPEC ministers. By Ryad Kramdi (AFP)

Algiers (AFP) - The world's top oil producers "must take a decision" to stabilise prices, Algeria's energy minister said on Sunday ahead of an OPEC meeting on Wednesday in Algiers.

Oil prices are already depressed after two years of oversupply amid deep disagreements between members of the Organization of Petroleum Exporting Countries.

Failing to agree on a production freeze could push prices even lower, Noureddine Boutarfa told reporters in Algiers.

"Every state in the organisation agrees on the need to stabilise prices, it just remains for us to find a format that pleases everyone," he said.

"The best solution would be a (production) freeze", he said.

As a result, OPEC members are losing between $300 and $500 million a day, Boutarfa said.

"No (oil) company will be able to withstand it if prices remain under $50 a barrel," he said.

Hopes of a deal to limit production pushed prices above $46 a barrel last week, but they slid to $44.48 on Friday as investors' optimism waned.

Venezuela and Iraq, which have been hard-hit by low prices, support the idea of a production freeze to boost prices.

But an attempt in April to reach a deal, led by OPEC linchpin Saudi Arabia, fell apart when its political arch-rival Iran refused to play ball.

Iran said it needed to bring its production back up to the level it enjoyed prior to Western sanctions over its nuclear programme which have since been lifted.

Algeria's cordial ties with OPEC members across the board mean it is well-placed to push for a deal.

"We are able to bring together states with political differences around a single table," Boutarfa said.

OPEC's 12 member states produce around a third of the world's oil, and their production decisions have a global impact on prices.

Boutarfa said Wednesday's summit would be a "first step" towards stability in the market.

"The Algiers meeting will not fail," he said.

Radio Gold, XYZ, others yet to receive re-authorization lett...
31 minutes ago