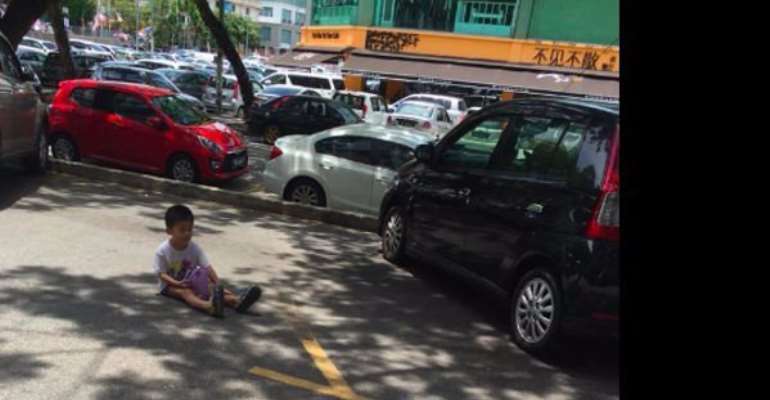 A photo showing a young boy sitting in a busy Kuala Lumpur parking lot has been doing the rounds online, causing controversy.

According to the original Facebook post, the boy had to wait all alone in the hot sun for 20 minutes, to save the empty spot for his mother, while she went to bring the car.

The incident took place in a business area on Jalan Kuchai Lama road, in Kuala Lumpur, where it is usually difficult to find a parking spot during peak hours.

The mother allegedly had the bright idea to leave her young son sitting in a free parking space, to save it, while she went back to where she originally left the car. According to a Facebook post that has so far been shared over 8,000 times, the young boy was left unattended for 20 minutes.

The same post mentions that when passers-by concerned that the boy had been abandoned approached him, they were shocked to learn that he had been ordered to sit there to save the spot for his mother. It’s not clear whether someone actually confronted her over her irresponsible parenting, but the photo showing the boy sitting in the parking space has definitely caused outrage online.

“She should consider herself lucky that no one harassed, kidnapped or even hurt her child. She left her son to chance for a parking lot, that’s frightening enough,” one person wrote on Facebook.