Where Did NDC, NPP Draw Their Support? 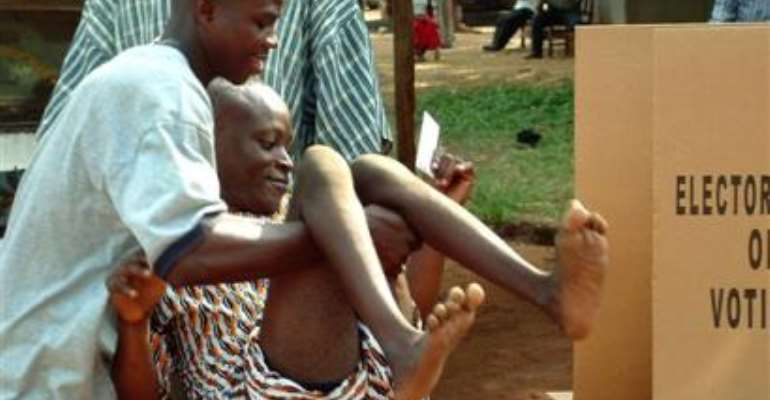 An analysis of Election 2004 by the Institute of Economic Affairs (IEA) indicates that the poor, less literate and disadvantaged populations have more political confidence in the National Democratic Congress (NDC), while the less poor, more literate and relatively privileged lean towards the New Patriotic Party (NPP).
A study by Mr Kwesi Jonah, acting head of the Governance Centre of the IEA, said political allegiance and support in the country had deep roots in socio-economic conditions.
In the study on Election 2004 and the policy challenge of the Government, which was presented to political party leaders, Members of Parliament (MPs) and civil society groups, he said “we can no longer pretend as a nation that Ghana is united and well-integrated when our politics and voting patterns are determined by deep socio-economic divisions.”
Mr Jonah, therefore, suggested that the material foundations of the country's political divisions must be addressed and urgently too.
He said by Election 2008, tangible improvement must be seen by the less privileged and disadvantaged people, if voting patterns were to undergo any significant change.
Mr Jonah said what must engage the attention now related to the kinds of policy actions that stood the best chance of bridging the gap between the poor and the less poor in society and also what the Government could do to earn the political support of the regions where the ruling party flopped in Election 2004.
He identified two key sources of policy information as the Ghana Poverty Reduction Strategy (GPRS) 2003-2005, which was currently under serious revision and the State of the Nation Address.
Mr Jonah noted that a critical examination of these two sources clearly indicated that the Government had its priorities right in terms of the development of the country, citing the priority areas of regional human resource development, private sector development and good governance.
He said the first had the potential of accelerating the pace of social and economic development, if economic growth rates continued to increase.
According to him, within the framework of the revised GPRS, a special programme should be adopted so that as quickly as possible, the socio-economic gap between the North and South could be bridged.
Mr Jonah observed that in addressing these issues, the second question had to do with the extremely difficult policies that the Government must implement within the next four years, saying among these policies were some of the most difficult and urgent ones.
He named them as deregulation in the petroleum sector, civil service reform and ensuring that poverty-related spending was at least 33 per cent of total domestic financial expenditures by the end of 2007. NPP, NDC HAVE STRUCTURES FOR DEMOCRATIC DEV A research conducted by the Institute for Democratic Elections Assistance (IDEA) has indicated that the two main political parties in the country have put in place sufficient structures for the development of the democratic culture in the country.
It also revealed that the parties, the New Patriotic Party (NPP) and the National Democratic Congress (NDC), had clearly defined party structures from the national to local levels, as well as a hierarchy of national executives.
“The composition, functions and guidelines of the parties' structures are laid down by their constitutions and in some cases other regulations besides the constitutions,” the findings said.
Messrs Wiafe Akenten and Elvis Otoo, research fellows of IDEA, made this known at a workshop which was attended by representatives of all the eight political parties in the country.
Dubbed “Political Parties Development Research,” it was concluded from the experiences of political parties in Ghana on conditions which allowed for or mitigated against the successful development and growth of political parties.
The research was also aimed at finding ways of assisting in the development and strengthening of political parties to be more effective actors of democratisation and good governance.
According to the findings, membership of almost all the political parties was determined by elections at the national, regional, constituency and local levels.
Some of the challenges facing the parties were up-to-date register at all levels, fundraising from membership dues and remuneration for party executives.
The research recommended that the parties should evolve effective strategies to raise adequate funding from their members to finance their activities.
All the other six minority political parties expressed grave concern about the scope of the research, which they said did not cover all of them and that it was not truly representative.