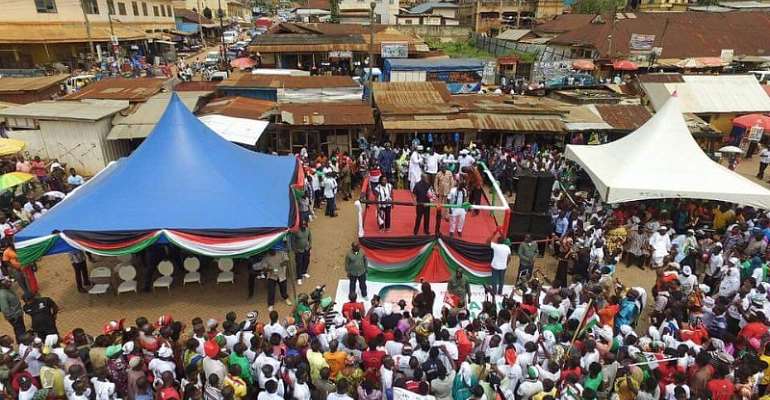 THE EASTERN Regional executives of the National Democratic Congress (NDC) on Thursday conveyed its supporters across the length and breadth of the Kwahu ridge in buses to welcome Vice President Kwesi Bekoe Amissah-Arthur, in the Nkawkaw Constituency – which happens to be the stronghold of the opposition New Patriotic Party (NPP).

Mr Amissah-Arthur, who doubles as the NDC vice presidential candidate for Election 2016, while addressing the crowd at the old taxi rank as part of his three-day regional campaign tour, said the number of people that came to receive him showed that they acknowledged the massive development that the NDC had made in the area.

According to him, the infrastructure development being witnessed nationwide over the last four years under President Mahama is unprecedented. “We are not here to sell the NDC to you. The Nkawkaw Zongo is NDC and so if we are here, we are home. We are only here to greet and pass through to propagate the gospel of the NDC to others that have not heard it.

“Every government has done its part but ours surpassed everyone's. You are all witnesses to it so if Mr Mahama is seeking your mandate for another four years, let's support him.”

He added, “We will not discriminate. The state resources will be shared equitably. Those in need of water will be provided with water, whether they voted for us or not, because they are also Ghanaians.”

Veep Amissah-Arthur called for peaceful co-existence before, during and after the December 7 elections.

Mr Kwesi Amissah-Arthur said the NDC is a united and peaceful party and that with unity the country would progress. He re-echoed the need to vote for Halidu, the NDC candidate for the Nkawkaw Constituency.

Be strong — Isaac Adongo consoles Bawumia with a cow for mot...
46 minutes ago