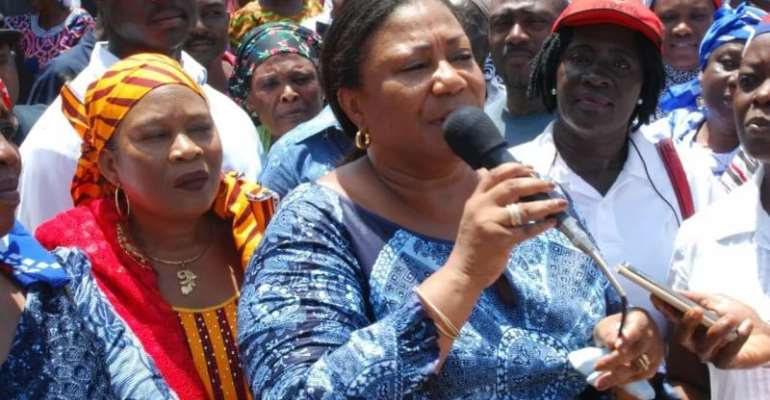 Rebecca Naa Okaikor Akufo-Addo, wife of the  flagbearer of the New Patriotic Party (NPP) Nana Addo Dankwa Akufo-Addo, has been very busy in recent times supporting her husband in the ongoing political campaign.

She stressed that her husband and the NPP can be relied upon to fulfill election promises when they come to power.

Speaking at the Mallam Presbyterian Church in the Weija-Gbawe Constituency in Accra, Mrs. Akufo-Addo stressed that Nana Akufo-Addo has built his image on being a reliable man and that he will deliver on whatever promises that he has made to the people of Ghana.

As part of her tour of the Weija-Gbawe Constituency in Accra, Mrs. Akufo-Addo also spoke to the congregation at the Mount Olive Pentecost Church at Top Base in Gbawe.

There she reminded voters of the track record of the NPP government.

She told them that the NPP, which started the school-feeding programme, Metro Mass Transport, the National Health Insurance Scheme, among other social interventions, has promised to introduce more social interventions in a Nana Addo-led administration.

“When in 2000, the NPP campaigned on introducing a National Health Insurance Scheme to replace the existing cash and carry system, we delivered on our promise.

Mrs Akufo Addo stressed the need to change the incumbent government which has failed to address the major issues facing the country after eight years of power.

She said rising unemployment among youth, the perennial energy crises that have crippled businesses around the country, the high cost of living in Ghana and the failing health insurance scheme would be addressed as soon as Nana Addo assumes office as President of Ghana.

She encouraged the congregants to keep her husband in their prayers as the campaign season comes to a climax and to vote massively for him to fulfill his promises to them and put the country on the right track.

Mrs Akufo-Addo also visited Oblogo, where she took part in a health screening of the people of the area.

She took the opportunity to thank the people of the Weija-Gbawe Constituency for the warm and hospitable welcome that she received from them.

Healthcare is a crucial cornerstone of the development agenda of the NPP and the only hope for Ghanaians is to elect a government which understands that healthcare impacts the daily lives of Ghanaians and is not just something to talk about every four years come election season, she indicated.

She later visited Tetegu, where she outdoored the campaign office of the Weija-Gbawe constituency.

Mrs Akufo-Addo was accompanied by regional executives, parliamentary candidate for Weija-Gbawe, Tina Naa Mensah and her constituency executives and some party bigwigs.