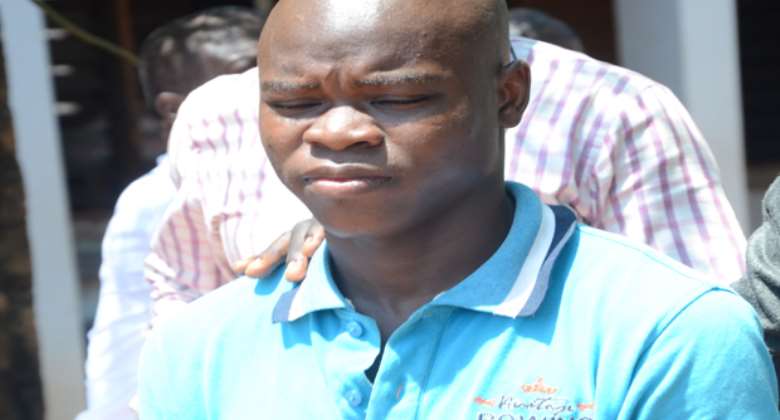 There was utmost silence in an Accra Central District Magistrate Court yesterday when a 22-year-old man narrated how he strangled a seven-year-old girl to death and had sex with the corpse for three hours.

The accused, Lucas Agboyie aka Gabriel or Kojo, a mason apprentice, said he murdered the girl after smoking weed and informing the victim, Ruth Amankwah that he wanted to have sex with her.

Lucas, also nicknamed Sympathy or Sky Lover, told the court presided over by Worlanyo Kotoku – while tears were rolling down the cheeks of the victim's mother – that the deceased tried to escape from him but he pulled her back to indicate his seriousness.

He said not even the pleas from Ruth to spare her were enough to save her, adding that he pressed the throat of the victim until she was dead and had sex with her in his metal container at Kubekro No. 1 near Atadeka, Ashaiman, a suburb of Accra, on April 19, 2015.

While stressing that he had regretted the act, he claimed that he did not know what led him to kill the girl, although he admits smoking weed prior to the act.

Stunned by the action of Sympathy, the magistrate repeatedly questioned him whether he knew Ruth was dead before having sex with her, and he answered “Yes.”

Charged with murder contrary to Section 46 of Act 29/60, the plea of Sympathy had not been taken.

Judge's Concerns
At the hearing of the over one-year-old case, Mr. Kotoku expressed worry about the delay of the Attorney General's advice on the matter.

He stated that there was no need for the case to drag on, especially when the accused had been consistent with his narration of a series of events in respect of the murder.

There was also no prosecutor at the court as the investigator repeated his three-month-old mantra that the substantive investigator had been indisposed.

Sitting continues on October 4.
Facts
Ruth was a Class One pupil of the Meshach Academy School at Zenu, also in Ashaiman, who lived with her mother at Kubekro where the accused also lived about 200 metres away from them.

At 8am on Sunday, April 19, 2015, the mother of the deceased prepared porridge and sent the victim with GH¢20 to buy bread from a nearby shop for their breakfast.

Having waited for a long time without Ruth returning home, the parents became alarmed and searched for her in the area but to no avail, until an informant told the complainant that she saw Sympathy pulling the deceased into his metal container.

Body Found
Following that the search team went into the said container but the accused was not there.

The team rather found Ruth's naked body lying dead in a supine position on an old student's mattress with blood oozing from her mouth and nostrils. Sympathy was consequently arrested.

When questioned, he admitted the offence, confessing that he killed Ruth and had sex with her afterwards.

Pushed further for names of possible accomplices by the search party, the accused initially insisted he killed Ruth on his own volition, but later mentioned one Baba Ali as the one who contracted him to murder the victim for money, house and a vehicle.

The accused person was however, not able to lead the police to the said Baba.

Set aside the purported rejection of 2022 budget - Majority ...
3 minutes ago

Xavier Sosu fights back, files for stay of execution against...
3 minutes ago