Mahama is a President Ghanaians can trust – Julius Debrah 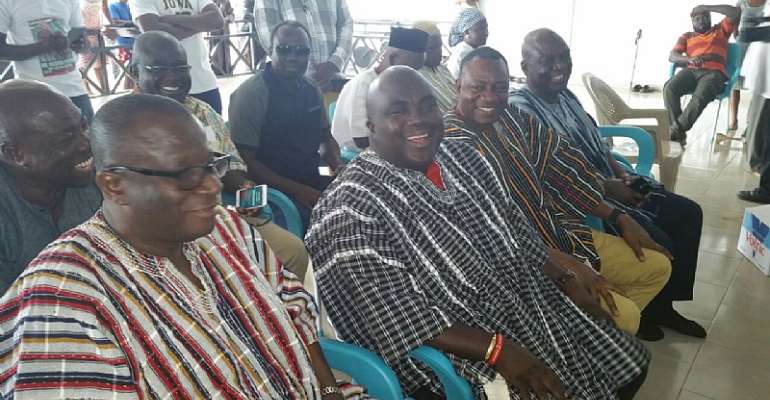 The Chief of Staff, Julius Debrah, has stated that, President John Dramani Mahama, the leader of the governing National Democratic Congress (NDC), is a President Ghanaians can trust.

“One reason why I trust my president, not because I work for him; but it’s because of the principles he espouses. He is an epitome of hard work, honest, fair, God-fearing, knowledgeable and above all his commitment to building a just and equitable society,” the Chief of Staff stated.

Mr. Debrah made these remarks when he paid a courtesy call on the Paramount Chief of the Lawra Traditional area, Naa Dr. Edward Puowule Karbo, at his palace in the Upper  West Region as part of his campaign tour of the region.

“Having walked with him, if I look around and I see the developments that have taken place these few years under President Mahama in the area of education, health, first class roads which did not exist in the past, I can say without a shred of a doubt that President John Dramani Mahama is a leader Ghanaians can trust and rely on at all times,” Mr. Debrah said.

He said even though chiefs are not allowed to engage in partisan politics, he was of the view that the traditional authorities are wise and knowledgeable on issues of governance.

The Chief of Staff has therefore appealed to the Lawra Naa to entreat his people to retain President Mahama for a second term in office for accelerated development in the area and the whole country.

According to him, the chief has the wisdom to decipher between fiction and reality, and to propagate the good works of the President to his followers.

On the issue of equitable distribution of the national cake, Mr. Debrah said although the demands are many, he was happy that government was able to construct the Lawra – Nandom road.

“This government under President Mahama is desirous to ensuring all the nooks and crannies of this country get their fair share of the national cake,” he said.

In his address, the Lawra Naa, Dr. Karbo, said he was happy about the fixing of the Lawra road that leads to his palace.

“At the right time; I will praise the President myself,” the chief said.