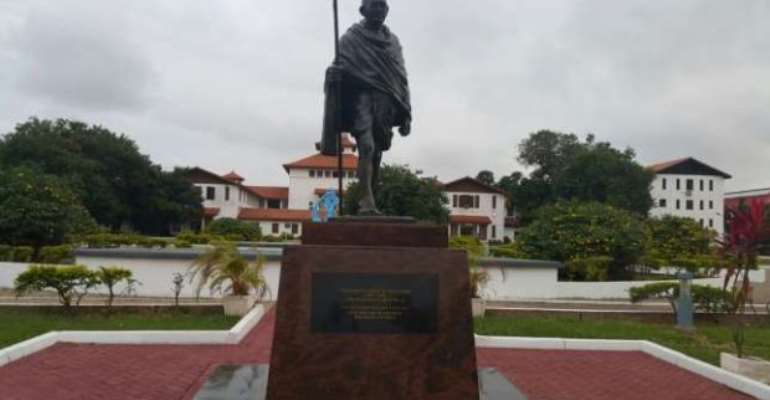 The Chairman of the Kwabena Nketia Center for Africana Studies, Prof. Kofi Asare Opoku, has backed calls for the pulling down of the statue of Indian icon, Mahatma Gandhi, on the University of Ghana campus.

Some senior members of the university, led by a former Director of the Institute of African Studies, Professor Akosua Adomako Ampofo, renewed a campaign to get the school to pull down the statue, which was unveiled during a visit by the Indian President Pranab Mukherjee.

Professor Opoku believes institutions like the University of Ghana should honour African heroes instead of iconic figures from elsewhere.

“However great Gandhi is; he may be great for the Indians, but for us we have our own heroes, men and women in African history that we don't know about them. So we need our own heroes because they are the ones who can inspire us.”

He explained that “if you take foreign heroes you would always think that greatness is reserved for foreigners; but we have our own great people here whom we must revere and honour to become a source of inspiration for our young people.”

Professor Akosua Adomako Ampofo, who started the campaign asking for the removal of the statue of Mahatma Gandhi, from the University of Ghana campus, argued that the Indian independence icon was racist against black people and honoring him set the wrong example for students.

Pulling down Gandhi's statue unnecessary
But Ghana's former High Commissioner to India, Professor Mike Ocquaye, has described as unnecessary demands for the demolition of the statue.

Professor Ocqauye, a professor of political science and a lawyer, believes the decision might have implications on diplomatic ties between Ghana and India.

“It will be most unnecessary, most uncalled for and not in the supreme interest of Ghanaians and we must know what serves our interest best. Some people in India wanted diplomatic relations to be broken in Ghana over the way we sometime back spited them, but caution prevailed and they kept their cool to show that they understand diplomacy and the ups and downs of international relations and today the relationship is a bit better and we look forward to it being better still,” he added.