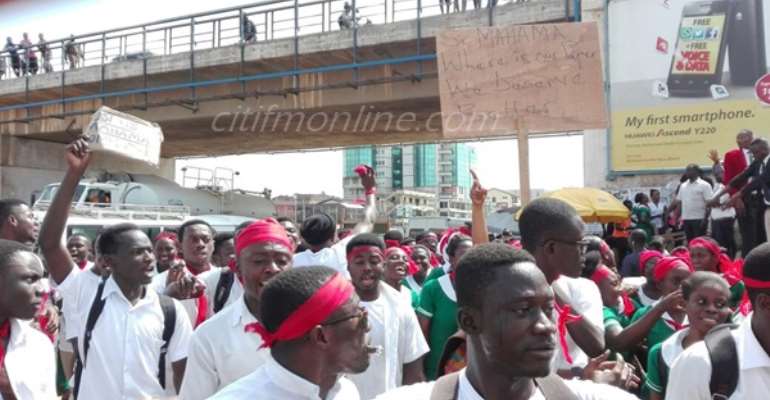 Scores of trainee nurses and midwives on Thursday morning poured out onto the streets of Accra to express their anger with government for refusing to pay allowances they said were due them.

The demonstration was also to advocate for the employment for all qualified nurses and midwives as the aggrieved nurses complained that the government has failed to create job opportunities for them.

The protesting nurses and midwives trainees said the National Democratic Congress (NDC) government risked losing their votes if it did not show any commitment to addressing the pertinent issues affecting them.

The nurses who had tied red bands on their wrists, heads, some around their arms marched through the streets of the city chanting war songs.

They marched from the Obra spot at the Kwame Nkrumah Circle through some principal streets of Accra and converged on the Hearts Park to present their petition to government.

Some of them were holding placards with inscriptions such as; “An hungry nurse will snatch Mahama from his wife”, “No allawa, no vote”, “Mr. President, just the allawa” and “Sir Mahama, where is our paper, we deserve better”.

“Me and my colleagues, we have decided that in the 2016 elections, we are not going to vote. It is very painful, for us to work without getting anything,” another student lamented.