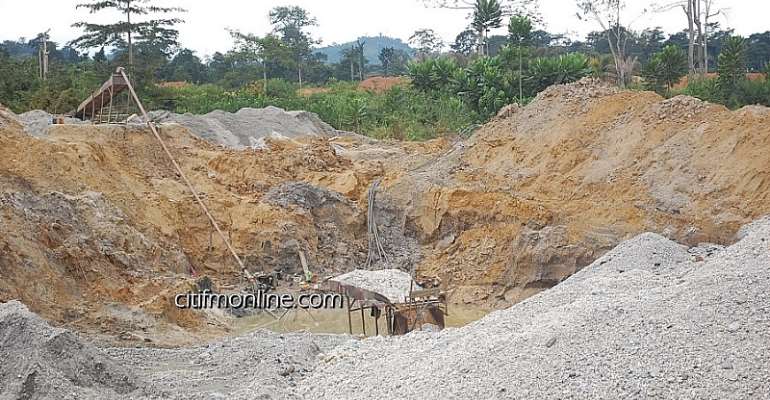 The Ghana Association of Small Scale Miners (GASSM) is blaming government and its allied institutions for the rise in illegal mining activities, also known as ‘galamsey’ in the country.

The association believes the lack of political will and monitoring by the mandated institutions have led to the destruction of aquatic life as major water bodies have been heavily polluted.

It added that the activities of illegal miners have resulted in the destruction of forest reserves and farms.

Speaking to Citi Business News, the Public Relations Officer of  GASSM, Francis Opoku called on people in authority to stop interfering in the work of  security agencies.

“Let me say that the Police are doing a fantastic job by arresting these illegal miners but sometimes what happens is that you have people in authority who will always ask that these people are released because they are their friends or people,” he lamented.

Mr. Opoku warned that activities of illegal miners cannot be stopped unless all the stakeholders get involved in fighting the galamsey activities.

“For us to solve this problem we all have to put our shoulders to the wheel by putting greed and selfishness aside and be patriotic enough to save our country from being destroyed,” he appealed.

As part of efforts rolled out by the association, Mr. Opoku stated that it has reported the activities of the galamsey operators to the security agencies.

Increase in galamsey
In recent times, there has been heightened debate about the activities of illegal miners who destroy aquatic life, pollute rivers and streams, and destroy forest reserves.

According to the Ghana Water Company Limited, the development has led to an increase in the cost of processing and producing water for Ghanaians.

Citi FM's investigations on galamsey
Citi Business News has learnt that if the activities of galamsey operators are not checked it could lead to the closure of some three water treatment plants– the Barekese, Kyebi and Daboase treatment plants.

The investigations showed that some lands and farms have been rendered useless due to chemicals used by the illegal miners in extracting gold.

Meanwhile, a former Minister of Lands and Natural Resources, Alhaji Inusah Fuseini has called for  galamsey operators to be licensed to help monitor their activities.