This Bole chief foretells doom for the NPP at Election 2016 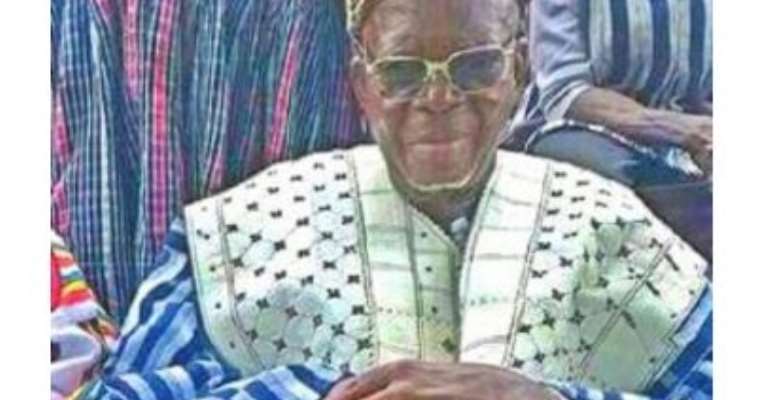 Folks, when I read the news report featuring Yipalawura Mahama Yahaya, a chief in the Bole Traditional Area, who claims that the father of the running mate of the New Patriotic Party (NPP) Mahamadu Bawumia betrayed President Mahama’s father, I laughed out really loud. I did so because I saw it as the harbinger of the sad fate that awaits the NPP in that part of Ghana at Election 2016. (Of course, that feeling had already damaged the NPP at Elections 2008 and 2012; but Akufo-Addo and his team appear not to know it; they can't deal with it either, which means a lot.).

I took the trouble to unpack the chief’s comments, noting very well his strenuous attempt at opening eyes for us to know why a development-oriented leader should be upheld and his detractors condemned to the political wilderness. (See http://www.ghanaweb.com/GhanaHomePage/NewsArchive/Bawumia-s-father-betrayed-Mahama-Veteran-CPP-member-471350 ).

Of course, the chief didn’t burst out this way under the influence or inducement of anything except that he wanted to open eyes so those needing to know how to factor history into today’s politicking in Ghana can do so without falling prey to unscrupulous politicians seeking their mandate to serve their own interests to the detriment of the masses and the country. He said what he had to say because he wanted to open eyes to reality as far as the past is concerned. And he succeeded at many levels. He showed how the rivalry began between the main political figures of Northern Ghana extraction from Bole and Mamkpurugu led to needless enmity and under-development; or the negative impressions that have downgraded Northern Ghana to date just because of political mischief and a deadly act of betrayal.

In truth, I admire this chief for being so blunt. He should have come out long ago with this revelation to help us know a lot more than we have done all this while. The question is: Why should Alhaji Mumuni Bawumia betray Mr. E.A. Mahama to the Great Osagyefo, win his trust and be given the position he sought only for him to do nothing as was being done by the one he had betrayed? Northerner against northerner to what end? Dirty politics or something more than it?

The tone of the chief’s message is certainly strong and harsh toward the Bawumia cause. And the message itself is clear: that the “sins” of Alhaji Mumuni Bawumia will be visited upon his son (this Dr. Mahamudu Bawumia) or any other of the Bawumia coloration seeking political office.

How about the implications? Too many that Dr. Bawumia won’t want to know of but which he cannot run away from because they have already manifested in the two previous elections in which he paired with Akufo-Addo and had little political capital (votes) from the Northern segment to boost the NPP’s lot. The voters in Mamkpurugu (Walewale, especially, where the Bawumias hail from) went for President Mahama as they had done for Rawlings and Atta Mills.

Coming at this time that the NPP is investing itself heavily in pushing Dr. Bawumia as a better alternative for President Mahama, the chief’s revelation has the potential to cause more damage to the NPP than we have immediately seen. It is clear that support for Dr. Bawumia in the Bole area has already dwindled, especially so because history is not on his side. His father’s political mischief, as recalled, is the canker eating away that support in the Bole community.

Why so? We can deduce from the chief’s concerns that what Alhaji Mumuni Bawumia did hurt the interests of the Bole area in terms of development projects. The chief has proudly told us about the singular effort of Mr. Mahama to bring electricity to Bamboi, even when a bigger area like Wa hadn’t yet had it. In his words, Mr. Mahama was a development-oriented politician who could have done more for his people had Alhaji Mumuni Bawumia not betrayed him to Nkrumah.

Folks, the chief’s anger cannot be easily assuaged. Even though he is described as a staunch CPP member, in his 90 years of existence, he knows what the Nkrumah government could provide the people that no other government except this Mahama-led one is resuscitating. Development projects are dear to the hearts of the people, and any government that embarks on them will win their votes. In that sense, the fact that Alhaji Mumuni stabbed Mr. Mahama in the back to grab his position but failed to do what was expected, he came across as despicable to the people in that part of Ghana, including his own Mamkpurugu area. History is good for purposes of recollection as the basis for future action. That is what the Bole chief’s revelation points to.

It is clear that a deep-seated hatred for the Bawumias on account of the betrayal of a Bole native (Mr. E.A. Mahama) as can be inferred from the Bole chief’s revelation exists and will persist until who-knows-when? Probably, until no Bawumia ever surfaces to seek political office against someone traceable to Mr. Mahama’s legacy.

Without reading deeper meanings into the chief’s revelation, those who will quickly criticize him are likely to stoke the fire all the more. I know it for a fact that those in the NPP who will condemn him for tracing Alhaji Mumuni’s political path from the United Party (“Mate Me Ho”) to the CPP and then to the Rawlings-led PNDC/NDC will jump on this chief to tear his reputation into shreds. But they will do so only to worsen the NPP’s woes. Those of us who know the truth revealed by this chief will wait to see how Dr. Bawumia reacts to it. If he has the guts to take on this chief, let him react to set the record straight from his father’s perspective; that is, if he even knows anything about the happenings that the Bole chief has touched on.

Here, then, comes the real political nitty-gritty. We know that Dr. Bawumia is itching to pursue his narrow-focused agenda of denigrating the Mahama-led administration—using his own interested analysis of the Ghanaian economy as he has done through public lectures to cry wolf. And to bait none other but the Vice President (Kwesi Amissah-Arthur) for a one-on-one debate on his lectures in the hope that it will help the NPP in its campaign of calumny.

The Vice President has chosen not to waste time on such a venture, apparently because it is not what the NDC administration needs to woo voters, knowing very well that the evidence of the government’s successes and failures is already in front of the people’s eyes that doesn’t need any flight into political rhetoric to prove or deny. He has chosen to spend time and energy campaigning at the doorstep of the voters, meaning that he won’t be drawn into the NPP’s kind of rogue politics. The trap has turned out to ensnare the trappers themselves, which they hate. How to extricate themselves from that trap is their main worry now, not to talk about their loss of the “manifesto war”.

Then, to add what the Bole chief has added to the equation? All hell is breaking loose for the NPP at this stage, which explains why the burden now lies heavily on Dr. Bawumia and his handlers. In the first place, what do they think a dry one-on-one debate on Ghana’s economy between Vice President Amissah and Dr. Bawumia will add to the political dimension to win votes for the NPP? Of course, it is the NPP that is pressing for that encounter, not the NDC. And it knows why. And we do too because we know that it is only a gimmick aimed at boosting its useless rogue politics, especially when we recall their boasts as Ghana’s “Interrectuals”. Tweaaaa to them!!

Knowing very well that such an encounter has no potential to influence voter decisions, the NDC has wisely pooh-poohed it and turned attention to real issues that are making it connect properly with the voters while the NPP is hamstrung by its own inadequacies.

The truth that the NPP camp cannot deal with is that Vice President Amissah-Arthur has already distinguished himself as a former PNDC Under-Secretary for Finance and Economic Planning under Rawlings and as a full-blown former Governor of the Bank of Ghana. He alone cannot be blamed for Ghana’s economic malaise. Anybody doing so deserves tons of pity. And the fact that the NPP sees him as such easily confirms the poor opinions about it that costs it votes at the polls.

On the flip side comes their Dr. Bawumia, whose only high point is that he is a former Deputy Governor of the Bank of Ghana. A Deputy Governor of the Bank of Ghana under Kufuor who led the team of swindlers on the Ghanaian Cedi redenomination exercise to cause more problems than the situation demanded. And such problems have continued to be highlighted by the NPP as landmark accomplishments for which Ghanaians should reject the incumbent. How pathetic!

Beyond that, the point that can be traced back to the scathing personal attacks launched on the Bawumia family by the Bole chief returns for attention. Where was Dr. Bawumia when Vice President Amissah-Arthur was the Governor of the Bank of Ghana? If the NPP people can answer this question, they will be helping us explore all the more the implications of the revelations made by the Bole chief. Otherwise, let them be told rightaway that the Bole chief has already told them where the voters will go on December 7. No need to waste their time and resources campaigning there because their electoral decision has already been made to favour those who are for development and those who are against it.

What exactly is in the Mahamas that irks the Bawumias? I don’t know; but what I know is that a substantive President of Northern Ghana extraction seeking the renewal of his mandate to lead Ghana is better than a running mate of Northern Ghana extraction running a fool’s errands to be consigned to the shadows if his political party wins the elections. The late Alhaji Aliu Mahama is turning roughly in his graves. Too bad for now.

The chief’s message resounds. Even as President Mahama is leading efforts to construct development projects all over the country in laying the foundation for an economic take-off, what do we see? His political opponents have hand-picked a fellow-Northerner to spearhead their vicious efforts to undercut him, presenting him as a Northerner who could do the work. As a Vice President without any clout? When there is already a Northerner as the President of Ghana with a clout? (Of course, it is not all about Northerners being privileged, but the kind of politics being done makes me go this way). Thus, can we conclude that this Dr. Mahamudu Bawumia is walking the trail set by his father decades ago? Once a traitor to their own people’s cause, always a traitor? Who needs traitors, anyway?