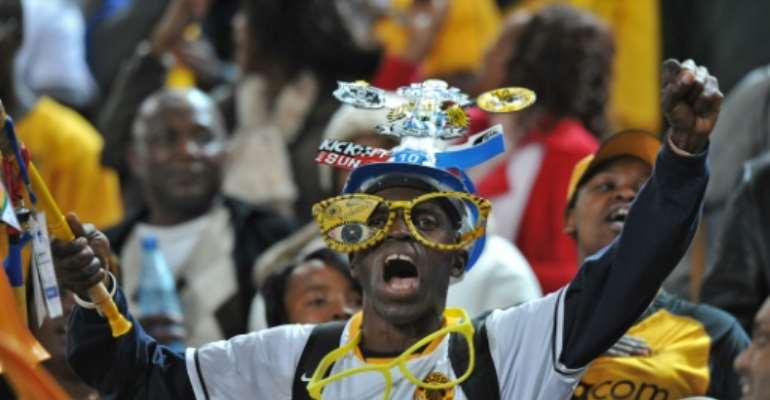 Kaizer Chiefs lost their opening league game and drew the second having conceded a goal that big-screen replays showed had not crossed the goal-line. By Alexander Joe (AFP/File)

Johannesburg (AFP) - Kaizer Chiefs won for the first time this season on Wednesday and Orlando Pirates surrendered a perfect record on matchday 3 of the South African Premiership.

A harshly awarded second-half penalty was driven into the corner of the net on 65 minutes by George Lebese to give Chiefs a 1-0 win at promoted Highlands Park.

Victory in north-east Johannesburg was a huge relief for under-fire coach and former South Africa captain Steve Komphela after his second season in charge began badly.

Chiefs lost their opening league game and drew the second having conceded a goal that big-screen replays showed had not crossed the goal-line.

Adding to the frustrations of supporters used to success was an early exit from the lucrative Top 8 Cup competition.

Chiefs changed a tradition of employing foreign coaches by hiring Komphela from unfashionable Maritzburg United, but his first season ended without any silverware.

The Soweto outfit also failed to qualify for either of the 2017 CAF competitions, leaving officials open to ridicule after they claimed Chiefs were among the top teams in Africa.

After launching their league campaign with two victories, former African champions Pirates had to settle for one point from a 0-0 draw with newcomers Cape Town City in Soweto.

An early injury to Gift Motupa, who was replaced by Ghanaian speedster Bernard Morrison, disrupted the rhythm of the Buccaneers.

City bought the franchise of Mpumalanga Black Aces and hired coach Eric Tinkler, who was freed by Pirates in mid-year after a trophy-less season.

Pirates lead 2015-2016 league runners-up Wits on goals scored with both clubs having seven points, one more than Durban-based Golden Arrows.

Defending champions Mamelodi Sundowns are in the bottom half of the standings, but have played only one game because of African commitments.