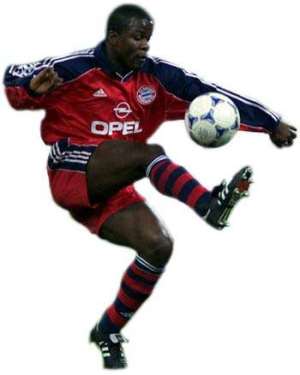 WORKERS of International Recycling Company Ghana Limited, a company co-owned by Mr. Samuel Osei Kuffuor, the Ghanaian ace football player and deputy skipper of the national team, the Black Stars, are crying foul over what they described as the rigmarole that is going on in the company.

They have accused Mr. Osei-Kuffuor of hatching plans and conspiring with one of the directors, Mr. Walter Dueck, to kick out the third co-director, Mr. Kwabena Gyimah, who is also the managing director of the company.

The national deputy skipper, who is the main financier of the company, had refused to remit funds for several months to pay the workers, as a result of which activities of the company had come to a standstill. This paper has learnt that the supposed plan hatched by Osei-Kuffuor and the company's consultant, Mr. Dieter Felder, to kick out Mr. Gyimah, who holds 25% of shares in the company and is its managing director, has brought the activities of the over 60 workers of the company to a halt and their salaries amounting to ¢156, 880,000 not paid for the last two months, amid various debts incurred by the company.

According to the workers, during the last Christmas festivities, as their salaries were halted, Mr. Osei-Kuffuor, who had then come on a visit, urged them to go on demonstration against Mr. Gyimah to cause his removal from the office, so that he, Osei-Kuffuor, could take over the company and pay them.

A visit by The Chronicle to the Tema shipyard revealed that the ship, bought from Anyidado Company at the cost of US$450,000 of which US$12,000 was paid, is stranded at the yard, making the workers redundant. The general manager, Mr. Samuel Addison, expressed dismay about the events and called for immediate action to ensure that sanity is brought into the saga and their salaries paid them.

According to him, there are four directors of the company of which three others are supposed to be its financiers. He said at a point in time, the resources stopped coming, immediately Mr. Felder, who claimed to be a consultant, emerged.

He said the consultant made allegations against Mr. Gyimah that he inflated the cost of the vessel/ship bought from the Anyidado Company and therefore he impeded the release of the funds to pay the workers.

Mr. Addison claimed that at a point in time, Mr. Osei-Kuffuor threatened the director and even took the company's car away from him, after instigating the workers against him.

"Somewhere 23rd December, last year, Mr. Osei-Kuffuor came to the office and urged the workers to demonstrate against the director to force him out and he later brought his brother in law take over the company," he said.

His report was corroborated by the workers, including the victim, Mr. Gyimah, and the security personnel, who told this paper that they had also not been paid.

Mr. Gyimah expressed shock about the trend of events but decided to hold on until further notice, adding that he was emotionally blackmailed by the so-called the consultant, with the connivance of Mr. Osei-Kuffuor.

He said it was unfortunate that in the era of the golden age of business, his compatriot could mastermind a plan to ditch him.

He narrated the events that unfolded during the setting up of the company and how the International Recycling Company Ghana Limited came into existence, but dismissed the allegations made by Mr. Osei-Kuffuor and his counterpart against him, adding that at the appropriate time, the facts would be known.

Mr. Gyimah again recounted how under the auspices of the deputy skipper the company issued postdated cheques to various companies that supply them materials which later bounced as means of frustrating him and others.

The co-director alleged that Mr.Osei-Kuffuor threatened his life as the managing director gave an account of. Efforts to reach Mr. Osei-Kuffuor proved futile, though he was reported to be in the country, as he reportedly sought permission to absent himself from the national team that played in Amsterdam, Holland, last Wednesday, to attend to family issues.

Earlier, on December 17, last year, Mr. Osei-Kuffuor and the consultant, Mr. Dieter Felder, signed a memo which stated among others, that "Shareholders, namely Mr. Samuel Kuffuor and Mr. Dieter Felder, standing in place of Walter Dueck, unanimously agreed upon that Mr. Kwabena Gyimah is as from this day, 17th December, 2004 ceased to be the Managing Director of International Recycling Limited, but he is responsible for the past events during his term.