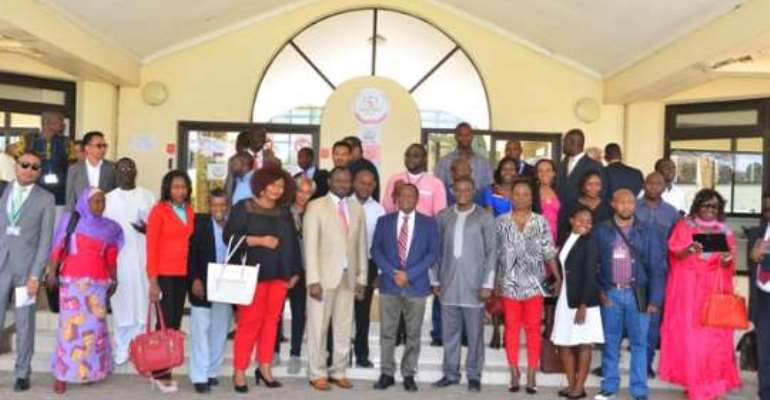 By Francis Ameyibor, GNA
Accra, Sept. 20, GNA - The African Court on Human and Peoples' Rights (AfCHPR) has set out modalities for the establishment Legal Aid Fund and the creation of the Pan African Human Rights Institute.

The AfCHPR is to table the modalities at the 5th Annual Meeting slated for Arusha, Tanzania from September 19 to September 22, which is being organised in collaboration with the African Commission on Human and Peoples' Rights (ACHPR).

Justice Sylvain OrÃ©, President of the African Court, said the 2016 Annual Meeting would serve as a platform to cement relationship of co-operation based on complementarity between the AfCHPR and ACHPR.

Justice Ore told the Ghana News Agency in an interview that the African Court is a continental court established by African countries to ensure protection of human and peoples' rights in Africa.

It complements and reinforces the functions of the African Commission on Human and Peoples' Rights.

He said it was adopted by Member States of the then Organisation of African Unity (OAU) in Ouagadougou, Burkina Faso, in June 1998.

The Protocol came into force on January 25, 2004 after it was ratified by more than 15 countries.

The African Charter established the African Commission on Human and Peoples' Rights.

The Commission was inaugurated on November 2, 1987 in Addis Ababa, Ethiopia. The Commission's Secretariat has subsequently been located in Banjul, The Gambia.

Speaking at a conference to commemorate the International Day to End Impunity for Crimes Against Journalists (IDEI), Justice Ramadhani noted that on the African scene there are a number of instruments which guarantee freedom of expression.

He urged African governments to establish the necessary conditions to foster citizen participation, transparency and access to information, freedom of the press and accountability in the management of public affairs.

Justice Ramadhani stated at a day's seminar to launch the 2016 International Day to End Impunity for Crimes Against Journalists slated for November 2, is on the general theme: "Strengthening Judiciary system and African Courts to protect Safety of Journalists and End Impunity".

He expressed the need to raise awareness and share good practices among judges and other relevant players on key international and regional standards on freedom of expression, freedom of press, safety of journalists and how to combat impunity on crimes against journalists in Africa.

The former AfCHPR President also cited the ECOWAS treaty which also guarantees freedom of expression in Articles 66 even more elaborately.

These principles reaffirm the fundamental freedom of expression as an individual human right, a cornerstone of democracy and a means of ensuring respect for all human rights and freedoms, he said.

He said the Pan African Parliament also adopted a resolution on October 12, 2012, titled Press Freedom for Development and Governance: Need for Reform.

'The instruments, the declaration and the resolution that I have cited and others, which I have not referred to guarantee freedom of expression but I dare say that what is seriously required is instruments to guarantee the safety of the journalist themselves.

'On the contrary most countries have provisions for the punishment of journalists who go astray in the course of their duties in the form of criminalisation of defamation,' he said.

He said the African Court has developed jurisprudence on freedom of expression and the rights of journalists in the case of Lohe Issa Konate v. Burkina Faso.

He said Lohe Issa Konate, was a contributing editor for a weekly newspaper L' Ouragan and was found guilty of criminal defamation after he had written several articles against the prosecutor of Burkina Faso. He was sentenced to a jail term of 12 months and was also ordered to pay a fine of CFA F1.5 million (equivalent to $ 3000).

Justice Ramadhani said the case was brought to the African Court and it held that: Criminalizing defamation is valid; and custodial sentences for criminal defamation is invalid and that fines are sufficient remedies.

He said the decision of the African Court go a long way to ameliorate the fate of journalists who may be prosecuted for defamation.