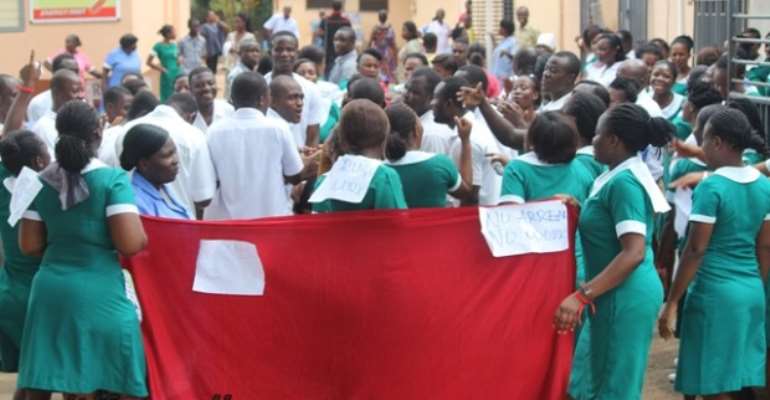 The Ghana Nurses and Midwives Trainees Association is set to hit the streets of Accra tomorrow [Thursday], to protest against what it describes as government's “lackadaisical posture” to resolve their concerns as trainees.

The demonstration is to press home their demands for government to pay trainee nurses; and midwives some allowances due them, and also ensure employment for all qualified nurses and midwives.

The demonstration was earlier scheduled for Monday September 19 ,  but the Police did not grant allow it saying it had inadequate men  to ensure orderliness.

“Although it was supposed to come on September 19, which the Police prevented us but we now have been granted the permit which has given us the guts to have the demonstration come tomorrow, Thursday September 22nd.”

Asabire explained that they are demonstrating because several pleas they have made to the stakeholders involved have failed to yield any positive result.

Demo not partisan one
“We have given out stakeholders so much time and respect to resolve our issue for us but it like anytime we give them the opportunity to resolve the issue, they always treat us to their advantage. We are students and we want this issue to be resolve because it has a major impact on our training. We want the issue to be resolved for us, this issue that we are pursuing is not partisan issues and nobody should ever say that somebody is being pushed by a political party to pursue another political agenda, no.”

Venue for demo
He said they will converge at the Obra Spot at Kwame Nkrumah Circle around 8:00am and go through some principal streets in Accra and end at the Accra Hearts of Oak Park “where we will be expecting the Chief of Staff to meet us and receive our petition.”