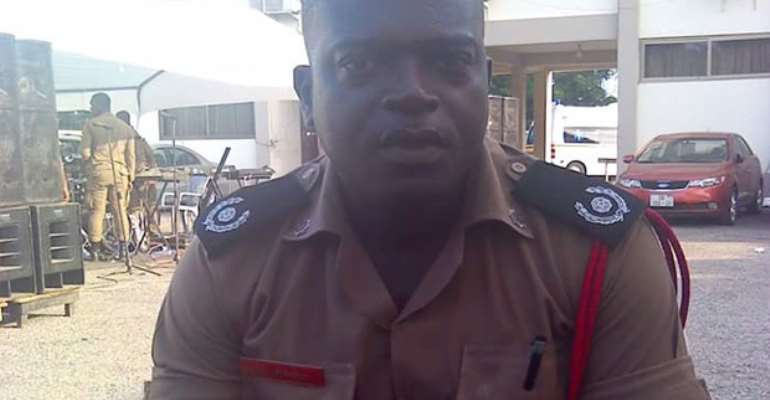 Ghana National Fire Service has sharply reacted to the reported sexual misconduct of the Techiman Municipal Fire Officer in the Brong-Ahafo Region, Eric Ansah. He has been suspended over alleged attempted rape of his subordinate.

Eric Ansah is said to have attempted to rape his 24-year-old subordinate in the early hours of Saturday at her residence.

Following the media report, Chief Fire Officer, Albert Brown Gaisie, is said to have directed the Brong-Ahafo Regional Fire Command to suspend the officer in question for allegedly sexually assaulting the lady, who preferred to be called Ataa.

Eric Ansah was said to have gone to the residence of the community fire personnel deployed to the Techiman Fire Station under the Youth Employment Agency (YEA) with intent to have sexual intercourse with her, but unfortunately for him, he had his penis bitten by Ataa.

The community fire lady told DAILY GUIDE that at about 12.20 am last Saturday, she heard a knock on her door and went to open it only to see Mr Ansah (her boss) standing there with a large plastic bag.

She said when she asked Mr Ansah why he was there at that time of the night, the officer told her that he wanted to bring her some dirty clothes to wash for him.

According to Ataa, when she collected the bag and turned to enter her room, the fire chief followed her and sat on one of the chairs in the room.

She said when she asked him to leave the room because she was going to bed, her boss refused to do so.

Instead, the lady claimed the officer began fondling her breasts and pulling her cloth.

She said she complained bitterly but the officer told her that as the municipal fire officer, he could get whatever he wanted and so she should give in.

The distraught lady said because the officer was very aggressive and threatened her life, she pretended to give in, adding that her boss then undressed and sat on the bed and asked her to suck his manhood.  “I resisted initially and later he threatened me saying he is the commander and so anything he wants he gets it; and because he said that I got scared he would do something bad to me.”

Being afraid of losing her job, she decided to give in with a different motive to defend herself.

“I decided to play to his gallery on the bed, and I told him I am ready and so he should do whatever he wants to do with me; but after romancing with him for three minutes, I grabbed his penis and bit it hard,” Ataa narrated.

She said the officer collapsed as blood was oozing.

After biting the penis, she realised he was bleeding and feared he could lose his life and therefore, called for help and Mr Ansah was taken to the Dr Kesse Hospital at Techiman for medical attention. He has since been treated and discharged.

The deputy Public Relations Officer (PRO) of the Fire Service, Prince Billy Anaglatey, said even though the Regional Fire Service had not officially lodged a complaint with the national headquarters, they had asked that the officer in question be suspended for now.

Speaking to pulse.com, he said, “We have not received any official report from anybody, but quickly the Chief Fire Officer has directed the Brong-Ahafo Regional Commander to immediately suspend the Municipal Fire Officer who has been mentioned in the case.

“He has also asked the Regional Fire Officer to constitute an investigation body to look into the issue to determine what exactly happened. He also asked him to get the lady and her family. The chief officer would want to have details of all these information that will enable him take appropriate decision.”