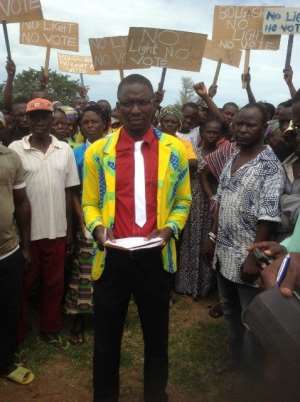 By Samuel Akapule, GNA
Bolgatanga-Sherigu (U/E), Sept. 20, GNA - Eighteen communities in the Bolgatanga-Sherigu area of the Upper East Region have called on the government to provide them with electricity and rehabilitate their roads.

At a press conference held at Sherigu, they said the area has not been developed and lacked the necessary infrastructure that could attract both local and foreign investors.

Mr Anthony Asakisango, the Spokesperson for the communities, said as a result of lack of electricity in the area, nurses who are supposed to stay in the Community Health based Planning Centre (CHPS) commute from Bolgatanga to work every day.

He said the communities have made several appeals to the government to rehabilitate the road network in the area but that had not been done, making movement very difficult during the rainy season.

He said the communities had decided that they would not vote for the National Democratic Congress (NDC) as they had been doing since 1992 if they did not get electricity before December because they would be voting only for development.

Mr Francis Aduko, the Assembly man for the area, said majority of the women in the communities were basket weavers but could not weave at the night due to the absence of lack of electricity.