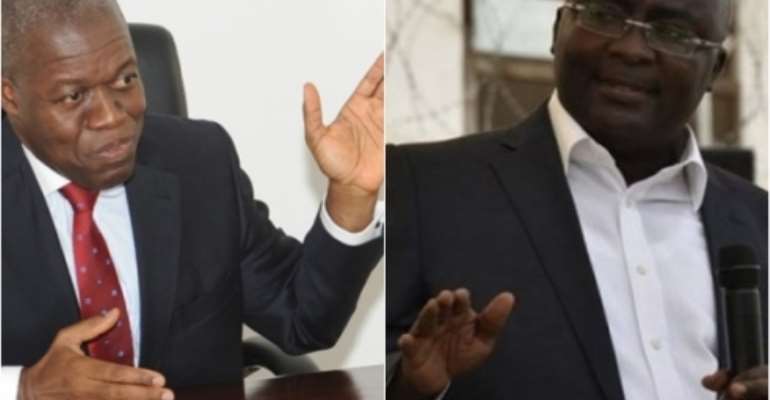 The opposition New Patriotic Party (NPP) has dared Vice President Kwesi Amissah Arthur to a challenge with its running mate Dr. Mahamoud Bawumia, following his recent lecture on the true state of the Ghanaian economy.

The NPP's Policy Adviser for the 2016 elections, Boakye Agyarko, threw the challenge to Mr. Amissah Arthur, a former Governor of the Bank of Ghana, when he addressed a news conference today [Monday], to respond to the promises in the NDC's manifesto.

The news conference was dubbed “Promises made, promises broken”.

The Vice President after Dr. Bawumia's report had been under pressure to respond to the issues as an economist. Although there had been reports that Mr. Amissah-Arthur was going to hold a counter lecture; that never happened.

Speaking at the NDC's manifesto launch in Sunyani, the Vice President announced that he had been advised not to respond to Bawumia through a lecture, but do so on political platforms.

'I'll destroy Bawumia's lies one by one' – Amissah Arthur

At the manifesto launch, Mr. Amissah Arthur described Dr. Bawumia's analysis of the economy as “ spurious lies ”, just as had been described by many government appointees, although the government is yet to respond to the lecture much more comprehensively.

“Part of my problem is that, they [NPP] want to bamboozle us to make us believe what they are saying is true. What they are saying is false. Through this spurious analysis, he [Bawumia] cannot tell us that in the 8 years of Kufuor's rule, there was a 459% increase in GDP… If even the economy grew by 8 per cent a year, you only double that GDP in 9 years… It is not possible. I have decided that everywhere we go, I will take one of his lies and explain to you why they are lies,” the NDC running mate said.

But Mr. Boakye Agyarko said “Nobody in the NDC has been able to come out to deny these facts that were put out by our Vice Presidential Candidate two weeks ago. We are still waiting for Vice President Paa Kwesi Amissah-Arthur to attempt a defence unless of course it's still raining.”

“Instead, what we have seen are panic reactions all over, for the Vice President to threaten to respond and then recoil, for the President to hastily address the nation in a two-hour broadcast to effectively launch the NDC manifesto four days before the scheduled launch. The future under another Mahama term would indeed be bleak. From their own resource allocation for the next four years, the likely scenario is that we are very likely not to have any money to pay salaries next year.”

The party has thus asked Ghanaians not fall for the President John Mahama-led National Democratic Congress' (NDC) “phantom promises” ahead of the December polls.

“The fact that remains to be disputed by the NDC and cannot be disputed is that President Mahama has destroyed whatever little performance credibility that he inherited from his predecessor. And, the Mills performance itself was a retrogression on the Kufuor years. It is with one eye on this abysmal performance of the President that the voters of Ghana must view the credibility of the long list of promises delivered at the weekend from a Government that has no policy credibility and had to run to the IMF in 2014 for some limited injection of credibility from that external body.”

“If Ghana is in crisis today, then we hate to warn you that Ghana faces a catastrophe under a future Mahama government. If he could not care, when he knew he still had to go back to the electorate for another re-election mandate, then imagine, just imagine, how very insensitive and even more uncaring he would be if given another four years after which he doesn't need to go and beg the electorate. There will be plenty trouble.”

Fuel price hikes: When did you realise you don't control oil...
14 minutes ago