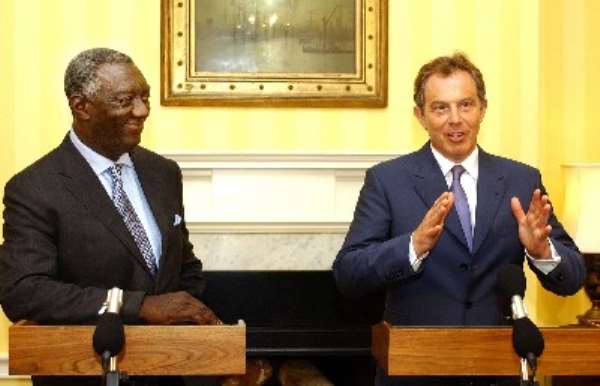 .... of nearly 80 million dollars Accra, Feb. 16, GNA - Britain on Tuesday announced plans to pay 10 per cent of Ghana's multilateral debt at a cost of 79.9 million dollars, as London forged ahead with an ambitious bid to tackle African poverty. "The British government is to pay 79.9 million dollars of Ghana's multilateral debt between 2005 and 2015," said a British Treasury statement. Following a Group of Seven (G7) agreement early this month for a proposed 100 per cent debt relief to the world's poorest countries, Britain swiftly announced it was taking immediate action on debts owed to it by 19 developing countries, including Ghana. Britain, as current president of the Group of Eight industrialised nations - the G7 plus Russia - wants the world's richest donor countries to take over a proportion of developing nations' debt owed to them through the World Bank and African Development Bank and service it themselves. Britain has pledged to pay 10 per cent of the total of this debt by 2015, on behalf of countries with good governance and established poverty reduction strategies.
In addition to Ghana, the treasury has reached agreements on 10 per cent debt write-offs with Mali, Tanzania and Mozambique.
The move followed a statement early this month by finance chiefs from the G7 nations, Britain, Canada, France, Germany, Italy, Japan and the United States, expressing readiness to provide 100 per cent debt relief for the world's poorest nations.

‘I haven’t rejected question on cost of Akufo-Addo’s travels...
8 minutes ago