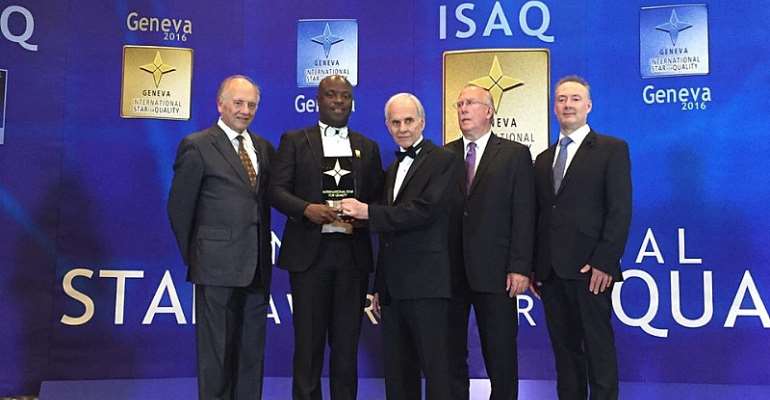 The Volta Serene Hotel in Ho, capital of the Volta Region of Ghana, has won a major international award in Geneva, Switzerland.

Business Initiative Directions (BID) Group One, a globally respected authority on Total Quality Practices and Concepts, gave the award – International Star Award for Quality – to the Ghanaian owned hospitality firm in the Swiss capital on Sunday.

“To receive the BID Quality Award is to become part of a team of companies, institutions, organizations and outstanding visionary business leaders, whose presence in 179 countries worldwide, represents entrepreneurship, success and Total Quality,” says BID Group One, organisers of the award ceremony, on their official website.

The BID Quality Award, the website adds, “Is a mark of excellence achieved by organizations which, in the philosophy of continuous improvement, have become drivers of innovation.

“The awarded organization, which has decided to walk a path of continuous quality learning, is a catalyst for the benefit of the community where it operates.”

The award, thus, becomes the highest ever achievement by Volta Serene Hotel, which will celebrate its first anniversary this September.

The elegant four-star Hotel is a subsidiary of the FIRST SKY GROUP of Companies headed by Eric Seddy Kutortse – a highly decorated Ghanaian entrepreneur.

Mr. Kutortse was in Geneva to attend the colorful ceremony at which the award was presented to his company. He received the award on behalf of the entire management and staff of the Volta Serene Hotel, and paid glowing tribute to the workforce, saying their individual and collective commitments to quality hallmarks have propelled the firm to “take Ghana by storm”. Some other firms from other parts of the world were also honored at the ceremony.

The coveted award to Volta Serene Hotel came less than a year after Mr. Kutortse was decorated as Ghana’s Group Chief Executive of the Year [2015].

“This is the DNA of the BID Award: to recognize progress, achievement, improve productivity and solutions proposed by organization and business leaders who have reached a level of success which before had seemed unreachable,” says BID One Group on its official website.

It adds, “Behind each BID award is a team dedicated to promoting and spreading the stories of success of awarded leaders and organizations at an international level. Upon receiving the BID Quality Award, support is provided by three organizations: BID Group One, whose mission is education in Quality Culture, Business Initiative Directions (B.I.D.), leading the organization of international events and conventions, and Imarpress, the communication agency and main media sponsor of BID Awards for Quality.”

By winning the award, Volta Serene Hotel will, according to BID One Group, receive the “support of a multi-national team of professionals, specialized in the communication, education and promotion of Quality Culture.”

BID One Group's website also says, “Behind each award recipient there is also a commitment to excellence and continuous improvement. This commitment to Quality Culture is the force behind companies, organizations and leaders who are recognized for a continuous search for quality and excellence”.

Located atop the breathtaking greenery of the Kabakaba Hills in the Volta Regional capital, Volta Serene Hotel has so far swept a string of local awards in Ghana.

On its website, the Volta Serene Hotel describes itself as the Volta Region’s “new hospitality address.”

On the phone from Geneva, Mr. Eric Seddy Kutortse, spoke of the significance of the latest award his company has received.

“The collective efforts of management and staff of Volta Serene Hotel have been recognized on the international stage as continuously meeting the best of global standards and practices,” he said.

“While we rejoice in the humbling glory of this significant endorsement of our brand on the global stage, we are –  by this feat – reminded of the need to continue working hard to stay on top as the brand that delivers the ultimate quality and true value for money experience.” he added.

The award, he said, is another major evidence that “with the right resources, the right team of men and women, and an unyielding commitment to total quality, it is possible, as Volta Serene Hotel has demonstrated, to build a truly powerful brand of global significance in Ghana.”

Mr. Kutortse seized the moment to invite tourists to see the award to his hotel as “just one more evidence that Ghana is a must-visit destination where customer experiences are continuously matching or exceeding the best of global hallmarks.”

“It is testimony that Africa is indeed on the rise,” he added.

Presented annually, the International Star Award for Quality (ISAQ) is one of the most prominent awards in the world. It celebrates the quality and excellence of companies that invest and strive for the enhancement of products and services.

Business Initiative Directions (BID) established the ISAQ in 1986. It is awarded yearly on the basis of the guidelines of the QC100, supported by the BID Quality Mix Program. The organizers use leadership values, excellence, innovation, and technology as determining factors for deciding winners of the award.

In 2013, the Graphic Group of Companies Limited from Ghana was decorated with the award in Switzerland. Group Chief Executive, Kenneth Ashigbey and Ransford Tetteh, Editor of the Graphic newspaper, were both in Geneva to receive the award.

In July this year, The West African Regional Magazine, adjudged First Sky Limited, the construction arm of the First Sky Group, as the Outstanding Construction Company of the Year [2016].

“This [award] is for revolutionizing the construction industry of Ghana by building roads, bridges and highways that have done the country proud,” said an official letter that communicated the decision to management of the First Sky Group.

“Some of your signature projects include the 27.7km MIDA road project, which FIRST SKY Limited completed at a record time; the on-going 27-kilometre road project in Krachi West District [Kete-Krachi], Volta Region to be completed in 2017, and many others have heralded you as the undisputable flagship of Ghana's construction industry;” it continued.

The formal presentation of the award to the FIRST SKY GROUP took place at Dubai's Grosvenor House Hotel. It marked the 3rd Edition of The West African Regional Magazine Business & Leadership Awards.

First Sky Construction Limited began as a minor one room office firm in 2002. Under Mr. Kutortse's leadership and in line with his vision, it has since developed to attain a respectable group status, FIRST SKY GROUP, boasting of avant-garde offices at Community 25 in the port city of Tema.