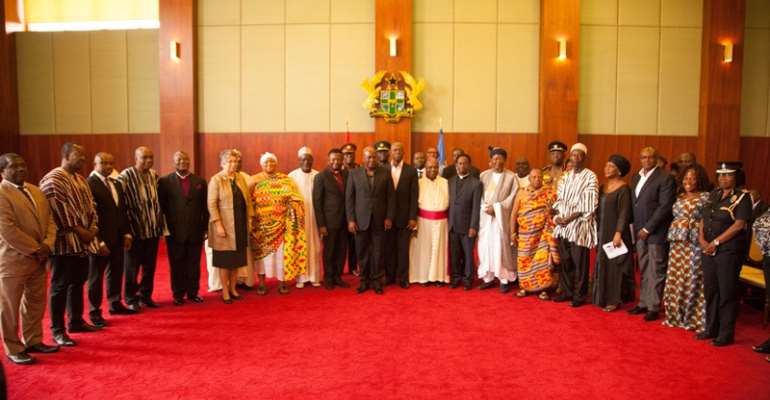 We still have not heard from the Ghana Peace Council and the many peace envoys, as sources of violence become clearer by the day, their impunities making unenviable headlines.

The so-called peace-seekers prefer directing their feeble queries at the wrong targets even as the fomenters of trouble are left to go scot free,

Preferring more media appearance than naming and shaming troublemakers, they have earned public opprobrium. The recent attack on New Patriotic Party (NPP) supporters at Kukuom in the Brong-Ahafo Region offered the Ghana Peace Council and so-called peace envoys an opportunity to prove their mettle. They did not and have therefore given us cause to believe that they are good for nothing. Those who think that the Council is useless have a case after all.

We have not heard from them yet but would surely do so when the aggrieved persons issue a warning that next time they are attacked without provocation they would respond in like manner.

We have not heard from the police, their local command in the Brong-Ahafo Region too timid to bark at those breaching the law, let alone making arrests.

It would appear that they have been warned to steer off cases with political undertones, especially when the victims do not belong to the ruling party. Indeed, it is regrettable that the moment the police tag a case political because it involves politicians, that is the end of it. It would not be followed up and deliberately allowed to gather dust. Many a criminal case has been abandoned this way and our hearts bleed that a country's political and law enforcement leadership would decide to follow this path much to the detriment of the country.

Rather than tackle this glaring case of impunity and gross dereliction of duty by the police because the politicians in power want it so so-called peace envoys are calling for the shutting down of social media when the debate on the subject has long been closed.

We would expose these busybodies who create unnecessary tension because such situations increase their earnings from their funding sources.

The NDC manifesto launch in Sunyani was so weird that some of us wondered whether the president, who continues to say he would ensure violence-free polls in the country, saw the nasty things his supporters did.

Which provocation can outdo the posting of the picture of the leading contender to the presidency on a coffin and parade same at a rally ground? For a party which can pull five million plus as the ruling one, such provocation is dangerous and should not be encouraged. This and other challenges bordering on criminal juggling of election figures to favour one party against the other are potential sources of trouble.

If the Peace Council does not appreciate the seriousness of this, we would be compelled to believe that it is not only toothless, but partisan. As for the peace envoys, they are mere busybodies.

15 Assembly Members, others granted bail for cursing Regiona...
2 minutes ago

I wanted to turn down Accra Regional Minister job because I ...
8 minutes ago