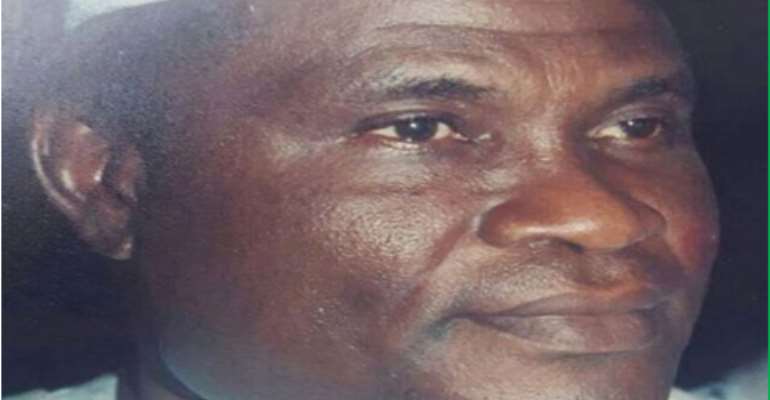 Of late Muslims in Ghana have lost great men who were noted for contributing towards development of Ghana and the advancement of Islam. The latest of these men to depart this earth to eternity was Late Alhaji Major Mohammed Easah (rtd). He died at Tema near Accra and was buried on September 12 in accordance with Islamic tradition. This gentleman who died at the age of 74 played many useful roles as a soldier, a public servant and genuine promoter of Islamic affairs in Ghana and the world at large.

According historical accounts he was a brilliant student for scoring high marks in his chosen subjects such as English and literature and also as a good school prefect at his “alma Mata” TI Ahmadiya Secondary School in Kumasi .No wonder that when he later found himself as a military man he displayed a high level of brilliance leading his becoming a leading soldier who was recognized as a potential leader when the late col Kutu Acheampong came to power in 1972. He found himself in many positions including occupying a desk at the bank of Ghana after being promoted to the rank of Major in 1975, where he represented the government of the day. He later helped in setting up the Coalition of Muslim organizations in Ghana (COMOG) in 2002 after his return from exile in Nigeria.

Before then he had helped in setting up the Ghana Muslims representative council (GMRC) while he was in active service when he helped in the constructing the Abossey Okai Mosque as head of the Mosque Committee. All those who have come in contact with major Easah would have a lot to say about him as good public speaker, counselor and a man of discipline and self-control who is good at keeping to his times of prayers and public meetings. He is said to have led many delegations to Hajj pilgrimage and to nations like Libya and Iran where he met leaders like late col Muammar Gaddafi and of Libya President Ahmadinejad of the Republic of Iran among many. The question to ask is why do we wait without recognizing and recording the good deeds of leaders like late Major Easah only after they are dead and gone?

Apart from major Easah the late Alhaji Adamu Iddrisu was one person who would not be forgotten by his family, the Muslim Ummah in Ghana and the nation as a whole. He died on July 27th but he left behind a legacy that is likely to be built on by his successors that include his children and workers. From nothing or very little assets this man who died at the age of 72 has left behind a flourishing business empire including global haulage company made up of a large number of haulage vehicles that convey large percentage of our cocoa through the ports of Tema and Takoradi.

His vehicles also ply the West Africa sub region nations conveying goods to merchants and governments of those nations. Alhaji Iddrisu Adamu has set up a foundation through which he has built mosques, and donated bore holes and other social amenities in all parts of the country. He also supports the airing of many Islamic programs on many radio and television stations in Ghana. Apart from other establishments, he has left behind a bank known as Royal Bank and created direct and indirect job openings for more than 12,000 people in and outside the country. As a result of the recognition given him Alhaji Iddrisu has won many national awards and another academic award an Honorary Doctorate Degree from the Kwame Nkrumah University Science and technology.

A quick reflection on our recent past would reveal information on important personalities who once lived working for the nation and the Islamic ummah in many areas. These men included Alhaji Dauda Otoo former head of Ghana’s customs and Excise Department for many years , who also became the first chairman of Ghana Muslims Representative Council in the early 70s. Alhaji Bashiru Futa was a good material for the nation and the Muslim Ummah. The legal practitioner was a top official of the Volta River Authority for many years , who later served as head of the Muslim Community who together with others like alhaji Dauda Otoo helped in forming the Federation of Muslim Councils of Ghana (FMC) ending a raging controversy between the GMRC and UGMRC. Alhaji Futa also represented Muslims as a member of the Consultative Assembly who took part in the processes of preparing the current fourth republican constitution.

Apart from these stalwarts others like Justice Yakubu Armah, a High Court Judge also paid his dues in Islamic development through the platform of the Ghana Muslim Mission to preach and convert many people especially in Accra to Islam. His role has been recognized shortly after his death by the Ghana Muslim Mission and his children led by Hajia Dr Rabiatu Armarh lecturer and Member of the Council Of State who have set up a library in his favor in Accra. Alhaji Bashiru Kwaw Swanzy a lawyer , once served as Attorney General in the First Republic under Dr Kwame Nkrumah and later converted through the Ghana Muslim Mission to Islam from Christianity and became an Islamic preacher after studying widely the Quran and other Islamic literature.

Late Nicholas Alando former Editor of Daily Graphic and the Mirror who later became Abdul Rauf Alando became Ghana’s ambassador to Saudi Arabia for a while in the Acheampong regime in the 70s. During his tenure of office as Editor and Ambassador he helped on advancing the course of Islam. Alhaji Sule Raji who was one a editor of the Graphic Communications Limited also served as Secretary General of the Ghana Muslim Representative Council in the 70s.

His services to Islam were acknowledged by the Muslims in the country after he is dead. Apart from these men we have lost Islamic leaders like alhaji Collison Coffie, Alhaji Ibrahim Darpoh, Alhaji Ibrahim Anyang, Alhaji Nettey and Alhaji Bright Davies who once served in the secretariat of the Ghana Muslim Representative Council and by extension the Federation Of Muslim Councils of Ghana . The personalities mentioned above who are no more are but a few of those we need to remember , study and follow their pious steps taken to provide leadership for Muslims in Ghana . It is our candid opinion that Muslims leaders must consider combining their efforts to take the following steps as done in some nations:

This way we would succeed in remembering the contributions of our heroes or living legends.

TO SUCCEED IN OUR PROGRAM to honor our living legends WE HAVE OPENED A CHANNELL FOR PEOPLE TO CONTRIBUTE TOWARDS GATHERING INFORMATION ON MUSLIMS GERALLY THROUGH OUR CONTACTS: No contribution is too small or too big. Contact and contribute to us on 0274853710 or 0264370345