A chemical you didn’t know you were eating 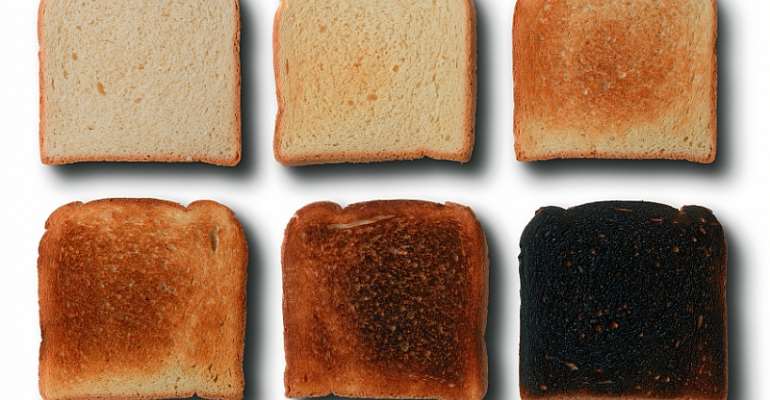 During cooking, a lot of interesting chemical reactions occur which lead to the formation of some other chemical compounds which were neither components of the raw food material nor nutrients in themselves.

Maillard reaction and caramelisation are two different processes that occur in food during cooking, however, have a similar effect on food

Image highlighting the differences between an unseared (right) and seared (left) steak..

Acrylamide is a chemical compound mostly formed as a product of Maillard reaction during frying, baking and/or roasting of carbohydrate-rich foods. This is a product formed from the reaction between the natural sugars present in the food and the amino acids (specifically, asparagine) also present in the food. The chemical is not formed as a result of food packaging or environment.

In studies where animals were exposed to high doses of acrylamide (doses higher than what is present in food), it affected their reproduction and the animals were observed to have developed cancer so on that premise, scientists believe it has a potential of causing cancer in humans. However, there are more on-going studies to validate this hypothesis.

Some of the foods in which acrylamide may be present in high levels include fried yam, French fries, bread, crackers, coffee, breakfast cereals, pies and cakes, pizza, breaded chicken, toast, roasted yam and several others. Chocolate products, infant formula, even fried egg and scorched rice (kanzo) have also come under scrutiny for their acrylamide contents.

Due to the presence of acrylamide in most foods, it isn't viable to completely eliminate it from your diet but there are ways by which you can cut down on how much of it you eat.

From the data collected from some of the studies so far, it has been found that the longer the food is cooked (fried, baked and/or roasted) at higher temperatures (120°C or higher), the more acrylamide is formed in the food. So for instance, when frying yam or potatoes, it should be fried to a golden yellow colour not a brown colour as the browner it gets, the more acrylamide is formed. Likewise, when toasting bread, it should be done to a light brown colour not a dark brown colour.

Also, following the manufacturer's recommendations on time and temperatures for foods like frozen French fries, avoiding overcooking, heavy crisping or burning can significantly reduce the amount of acrylamide in the food.

The results of some of the investigations further show that storing potatoes in the refrigerator can increase acrylamide content during cooking, therefore, it is more appropriate to store it outside the fridge in a dark cool place.

Soaking raw slices of potato and yam in water for 15 to 30 minutes before frying or roasting helps reduce acrylamide formation during cooking and soaked slices should be drained and blotted dry before cooking to prevent splattering or fires.

Boiling and steaming foods normally do not form acrylamide and the compound is also not formed or may be formed at lower levels in dairy, meat and fish products.

For good health, it is generally recommended that you adopt a healthy eating plan including eating plenty of fruit, vegetables and whole grains.

Scientists recommend these because including the foods listed above in your diet can have health benefits beyond decreasing acrylamide levels.

Share your thoughts with us.
By: Bezalel Adainoo/ [email protected]
The author is a food scientist. He's also the Content Creator and Host Author of Stay Well Now (www.staywellnow.com), a blog dedicated to delivering the right information to readers with respect to food and how it affects their health.

Mahama becoming President again is one of the greatest calam...
11 minutes ago

What Shatta Wale did was childish and stupid — Nii Ayitey An...
19 minutes ago