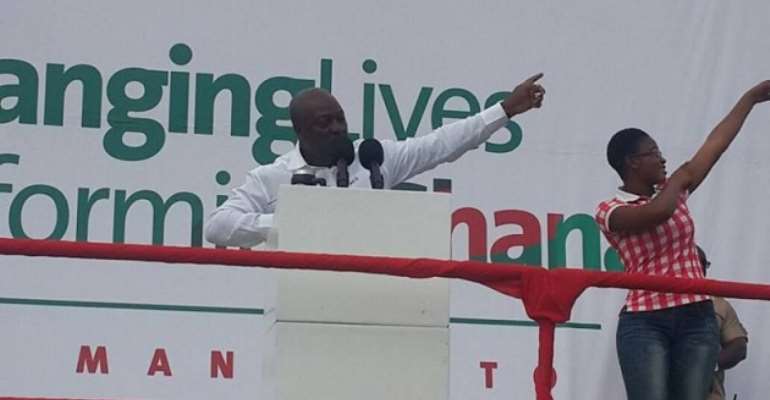 President John Mahama says the National Democratic Congress' manifesto does not contain mere promises meant to entice Ghanaians to vote for the party.

According to him, the manifesto captures the unique plans of the NDC to move Ghana forward if given the mandate to serve for a second term.

“Our [manifesto] is not a catalog of lofty promises woven together to entice the electorates to vote for us as others want to do,” he noted.

Addressing thousands of party supporters at the Sunyani coronation park in the Brong Ahafo region when the party official launch the manifesto on Saturday, President Mahama said the content of the manifesto were motivated by the party's vision that “speaks to the aspirations of our people while confronting our reality as a nation.

“It has been honed by our collective experiences as a nation, our history as a party and political tradition…the successes we have chalked and above all, our unyielding commitment to see our nation and its people prosper on the basis of hard-work and our social democratic principle,” Mahama said.

Mahama, who had earlier presented a highlight of the budget at a special event, earlier in the week said the document focused on four thematic areas that centred on improving the well-being of Ghanaians.

“We in the NDC put people first in all we do and it is for that reason that we aim to build a strong and resilient economy underpinned by the provision of vital social and economic infrastructure,” Mahama said.