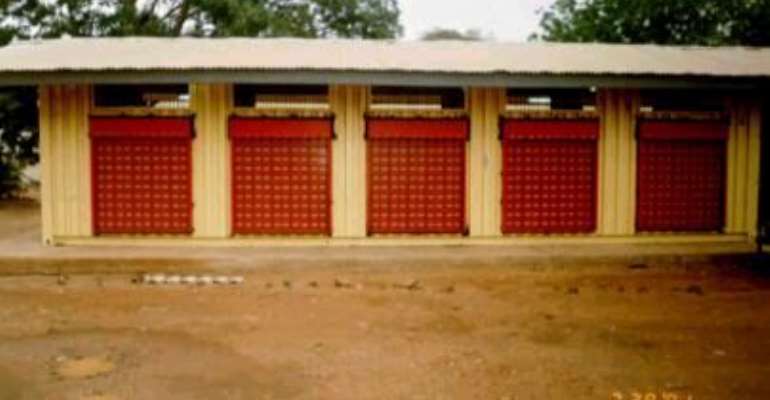 Armed men have created their own 'republic' at the Odorkor Post Office and have turned the area into a "no man's zone" where they operate between the hours of 6:30 pm to 5:30 am every day.

Knowing very well that the Odorkor area is a busy transit point for hundreds and thousands of people in Accra West the armed robbers have turned the area into a market place, where illicit drugs including cannabis (wee) and cocaine, are traded.

Public Agenda's painstaking investigations have revealed that apart from selling illicit drugs, the gangs attack passers-by in the night and sometimes in broad daylight with sharp knives and other deadly weapons seizing mobile phones, money and other valuables they find.

Some residents have also reported seeing men and women having sex openly at the post office during odd hours.

An agitated resident of the area accused the police and agents of the Narcotics Control Board of using the gangs as conduits for their own illegal activities. "We know that they, the police and some agents of the Narcotics Board channel some of the ceased illicit drugs through these guys to sell for them, or else how could these guys be so untouchable" the source alleges.

The source recalled that there have been occasions when the police have 'swept' the area and made some arrests, "but within an hour or two after their arrest, these guys return to continue their business as usual."

But when Public Agenda contacted the Odorkor Police, they denied aiding the gangs in their operations. DSP Attah Essuman, the District Crime Officer of the Odorkor Police Station confirmed that the police were aware of the presence of the armed gangs at the Odorkor post office and had carried out arrests at the place on many occasions but deplored the non-cooperative attitude of the public in providing information.

Quite agitated, DSP Essuman said, "the problem we have as law-enforcers in dealing with crime is the failure of the public to cooperate in providing prosecutable evidence. Arresting suspected criminals is one thing, but prosecuting them is another thing."

He added, "The Police administration has problems with inadequate personnel and logistics. We cannot be everywhere, so the public must assist."

When the Narcotics Control Board was also contacted, the Executive Secretary of the Board, Colonel I. K. Akuoko, denied knowledge of any connivance from his department. "Though I will not be able to speak for other security agencies, I can say that nobody from my department is involved in those acts until the residents bring contrary evidence," he said. He however, added that they would keep a watch on the area to find out the culprits involved.

This reporter who did the investigation had a close shave with death when on Thursday, January 19th he fell into the hands of one of the gangs. I alighted from a troro (commercial car ) at the Odorkor trotro station, near the post office.

After making 50 meters turn from the main Mallam-Odorkor road four middle-aged men armed with sharp knives drew toward me. They pushed me into a corner and demanded that I gave them money or risk my life. I did not have enough money on me, except some two twenty thousand cedi notes, which was in my breast pocket.

"They quickly took this out and demanded more, but I told them I did not have anymore. One of the attackers blurted, 'you should be prepared for a dirty game if you refuse to add more'." I took a piercing look at the first attacker who turned away his face and told his colleagues, "leave this damn thing, he has nothing."

They then walked away with my ¢40,000 and some sheets of paper. I breathed a sign of relief as they walked away with last money I had on me. It was then it dawned on me that something was amiss at the Odorkor post office area.

During the investigations, some residents disclosed that they are unable to visit the post office regularly in the evenings to check their boxes for fear of attacks from the armed gangs.

"Look, young man, these guys can be very 'dirty'. We have seen them on many occasions, harassing passers-by, beating them up and taking their belongings and the police simply would not stop them," a frustrated resident said.

But the police have maintained that there is little they could if the public effuses to give information on the operations of the gang.

The Odorkor District commander, DSP Fosu-Arkah, asked for a strong cooperation and support from the media and other stakeholders if the police are to root out crime in the country. "Awareness is what would resolve crime and all of us, police, media and other institutions in the country must work to create that awareness," DSP Fosu stressed.