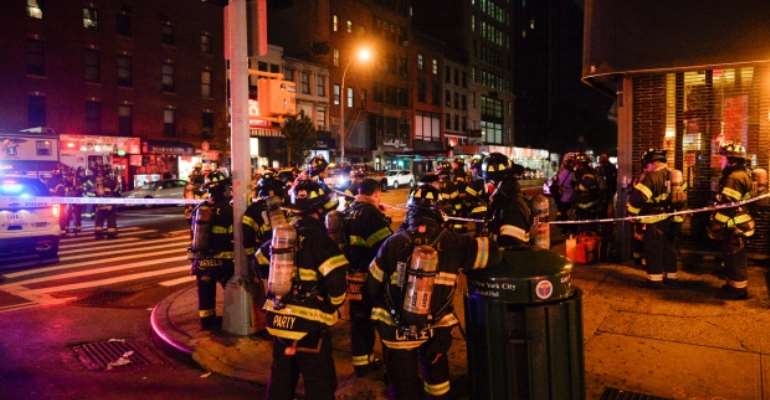 At least 29 people have been injured in an explosion in the Chelsea district of New York City, officials say.

The cause of the blast late on Saturday remains unclear. Mayor Bill de Blasio described it as “intentional” but said that there were no known links to terror.

The force of the blast blew-out windows and could be heard several blocks away.

Officials later told media that a device was found at a second location in the same district.

None of the injuries is life-threatening but one is serious, New York’s fire commissioner said.

Most of those hurt suffered cuts and other minor injuries from glass and other debris.

The explosion occurred around 21:00 (01:00 GMT on Sunday). Witnesses said people ran in all directions following the “incredibly loud” blast.

Unconfirmed reports said the blast went off in a dustbin. Several blocks have been closed down by police.

Mr de Blasio said: “We do not see a link to terrorism.” He said it was too early to determine the cause but added: “We believe it was intentional.”

He also said there was no evidence of a link to a pipe bomb explosion in neighbouring New Jersey hours earlier.

Law enforcement officials said that the device found at the second Chelsea location appeared to be a pressure cooker attached to wiring and a mobile phone. Police said it had been removed safely.

Chelsea is among the most fashionable districts of Manhattan and its bars and restaurants are usually crowded at the weekend.

President Barack Obama is being kept up to date on the investigation, a White House official said.

Democratic presidential nominee Hillary Clinton told reporters she had been in touch with New York officials.

“Obviously we need to do everything we can to support our first responders and pray for the victims,” she said.

“I’ll have more to say about it when we actually know the facts,” she added.

Speaking at a rally in Colorado before police had commented on the cause of the blast, Republican presidential candidate Donald Trump told supporters that a “bomb” had gone off.

He said: “Nobody knows exactly what’s going on, but boy, we are living in a time – we better get very tough, folks.”

The earlier bomb explosion in Seaside Park, New Jersey, on Saturday came shortly before thousands of runners were to participate in a charity race there. No injuries were reported.

On Tuesday President Obama and other world leaders are due to attend the UN General Assembly in New York.