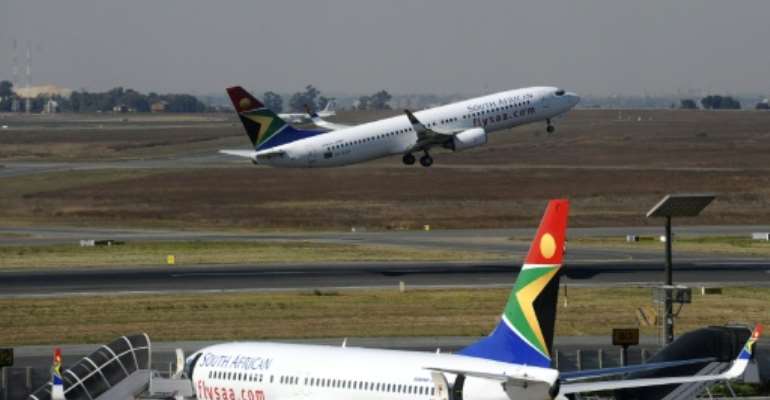 Financial reports for South African Airways presented to parliament last week -- some of them two years late -- painted a grim picture: in 2014-2015, the airline made a 4.7-billion rand ($330 million) loss. By Gianluigi Guercia (AFP/File)

SAA is "on the brink of disaster", Mmusi Maimane, head of the opposition Democratic Alliance (DA) party, said in a blunt summary of the situation this week.

The airline was going through "serious challenges, including governance and financial difficulties," agreed Finance Minister Pravin Gordhan, who says that without government support SAA is technically insolvent.

While the scale of the problem is beyond question, the cause of the rot is subject to fierce political debate.

Gordhan this month approved an application for a loan guarantee worth 4.7 billion rand -- bringing the total in state guarantees to the airline up to 19 billion rand -- with a strict list of requirements.

"It will not be business as usual," said Gordhan, who is seen as engaged in a battle with Zuma over the treasury's control of economic policy.

SAA has been compelled to publish its overdue annual reports, name a chief financial officer as the position was vacant since November, close unprofitable routes and aggressively cut costs.

"The primary focus of the board must be to return the airline to financial sustainability," Gordhan said.

The required measures are considerable, but some doubt they will be enough to turn the floundering company around.

The opposition alleges that SAA suffers from an ailment, which it claims, afflicts many of the country's state-owned enterprises: the misuse of public funds by the ruling African National Congress (ANC).

It accuses the airline's chairwoman Dudu Myeni of alleged incompetence.

Critics allege she has a close personal relationship with Zuma -- a claim the president was forced to deny last year -- but that did not stop Myeni being recently reappointed to her post despite fierce objections.

"Dudu Myeni has wrecked SAA and the cabinet decision to reappoint her as chairperson was irrational," the DA claimed.

The decision was also seen as a snub to Gordhan, who opposed Myeni's reappointment and who has clashed with a long list of Zuma loyalists after vowing to battle poor governance and graft.

Without naming Myeni directly, Gordhan fired back earlier this year, denouncing "individuals" who abuse state entities "as if it's their personal toy from which you can extract money when you feel like it".

The president, for his part, has in public tried to stay above the fray.

In parliament this week, he reaffirmed his confidence in Myeni, saying "I have seen her working", while also saying "there is no war between the presidency and the treasury".

The threat of an investment downgrade by ratings agencies has loomed ominously on the horizon throughout the year, and the battle for control of South Africa's public enterprises has investors worried.

A recent cabinet decision to entrust the president with oversight of state-owned companies -- a task which has previously fallen to ministers -- has done little to calm their fears.

Futuregrowth said it was concerned with how the companies were being run, as well as with "government infighting and threats to the independence of the finance ministry".

The fate of SAA "is a symptom of a broad problem across state-owned enterprises," Nick Binedell, a professor at the Gordon Institute of Business Science at the University of Pretoria told AFP.

"The scale of the financial challenge now does put SAA and the country brand in a difficult position."