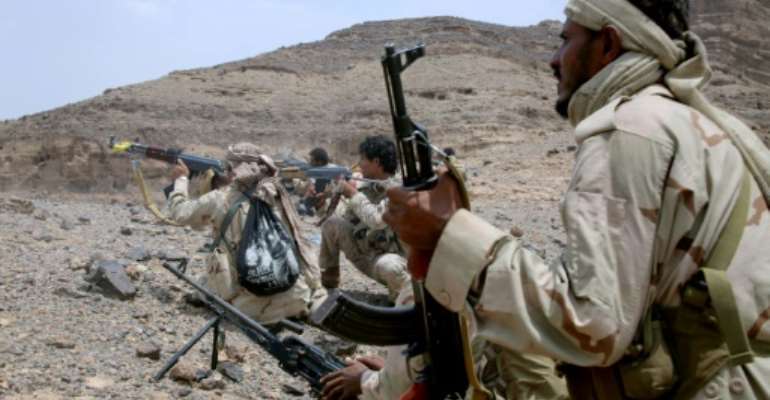 Yemeni forces loyal to the government of President Abedrabbo Mansour Hadi have struggled since the end of August to break the siege of Taez which the rebels have surrounded for more than a year. By Abdullah Al-Qadry (AFP/File)

Aden (AFP) - Yemeni pro-government forces battled Shiite Huthi rebels on two fronts Saturday, including east of Taez where they are struggling to break a siege of the southwestern city, military sources said.

"Five rebels and one of our soldiers were killed in the fighting" near Taez, a local pro-government commander, Fadl Hassan, told AFP.

He said loyalist forces drove rebels and their allies from five hills in the Sharija region on the borders of Taez and Lahj provinces.

"We are trying to break the siege (imposed by rebels) of Taez," Hassan said, adding that pro-government forces launched the operation from the eastern side of the city.

Forces loyal to the embattled government of President Abedrabbo Mansour Hadi have struggled since the end of August to break the siege of Taez which the rebels have surrounded for more than a year.

The Huthis, who seized Sanaa two years ago, were putting up fierce resistance despite also coming under attack from Saudi-led coalition air strikes, the sources added.

Witnesses also reported air strikes targeting rebel positions in Nahm northeast of Sanaa, and in the coastal city of Hodeida to the west.

The coalition intervened in Yemen in March 2015 to help shore up Hadi's government.

The conflict has since killed more than 6,600 people, most of them civilians, and displaced at least three million, the United Nations says.

Fighting intensified after the collapse in early August of UN-mediated peace talks held in Kuwait.