“I Am Aware” Project, Sensitization Exercise, Report On Non State Actors Meeting With Lanet Members In The Techiman Municipality 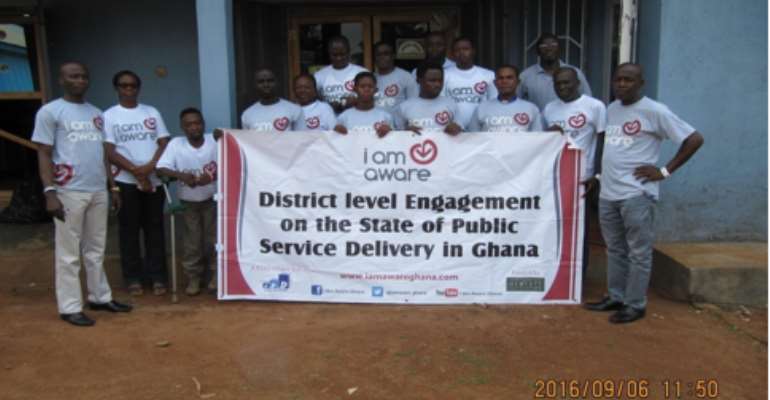 Development as a process requires participation of citizens in the production and delivery of goods and services, for an individual to participate in an action or project the individual should be well informed and aware of such a project or an action. It is on this note that the Ghana Anti-Corruption Coalition (GACC) in partnership with Centre for Democratic Development Ghana (CDD – Ghana) have designed a sensitization exercise with the caption “I am Aware” Project. CDD – Ghana secured a grant from the William Flora Hewlett Foundation in November, 2013 to implement a 4 year project to support a program towards improving quality public service delivery in Ghana through an informed citizenry advocacy.

The project seeks to align citizen interest (desire for quality public goods and service delivery) with public official/duty bearer accountability and responsiveness. This is done through the “I am Aware” project data center at CDD – Ghana offices.

On the 7th of September, 2016 at exactly 10:15 am, LANET in the Techiman Municipality of the Brong Ahafo Region hosted a delegation from GACC at the Head Office of Centre of Posterity Interest Organization (COPIO) a Civil Society Organization in Ghana which doubles as Coordinating Organization. This was a Non State Actor’s meeting organized by GACC as part of informing stakeholders on the “I am Aware project, the meeting was attended by a 20 member delegation from various CSO’s, Unions, Associations and groups within the municipality as wells as a 3 member delegation from GACC. The meeting was commenced with an opening prayer by Rev. Matthew Dapaah.

A welcome remark was delivered by Mrs. Beauty Emefa Narteh the Ag. Executive Secretary of GACC, she stated that one of the hindrance they do face is donors demanding for sustainability since they have effected projects which would empower LANET and stakeholders to take up the challenge in educating and training individual as well as groups on the production and delivery of quality goods and services by state institutions and agencies in Ghana. She also hinted on previous projects that GACC have partnered with LANET to execute, she also stressed on the veracity and credibility of projects since funding agency requires cogent result from every projects they do fund. She therefore pleaded with the participants to continue with their dedicated and hardworking nature so to ensure sustainability of all projects and actions.

Mrs. Beauty Narteh passionately appealed to the participants that they should be highly committed once more and select projects that are not capital intensive and economically demanding from the list of projects that would be presented to the participants by Mr. Abdul Kudus who would be facilitating a presentation as part of the meeting. She further emphasized the “I am Aware” project is data based related and that LANET is required to study and design an action plan for two projects which would be selected by the participants.

Mr. Abdul Kudus was called upon to facilitate a presentation on the seven targeted areas of GACC as part of the “I am Aware” project, he clearly stated that participants are required to select two from these focused areas of concern: security, health, education as well as water and sanitation. He continued by given facts and figures (baseline data) on the research conducted in 2014 to ascertain the potential and challenges in the aforementioned sectors in the Techiman Municipality. Moreover he commended Techiman Municipality for been among the highly rated areas as far as GACC projects are concerned.

On education, the presenter stated that there is a higher discrepancies in the teacher to pupil ratio, most of the pupil who do write BECE do not get the required grades for them to qualify and be enrolled in Senior High Schools due to inadequate logistics and facilities. As part of his presentation Mr. Kudus talked on the health potentials and challenges as well as the major disease and issues bedeviling the Municipality such as maternal and infant mortality, anemia, diarrhea, pneumonia and the number of patients been admitted at various health centers as well as beds available.

However, water was also among the areas captured in the presentation, he made known to the participants the number of hand dug wells, mechanized boreholes and water resources which are available in Techiman. It was brought to light that the total percentage of accessible water resources was 36. Again, sanitation which has been a major concern in the Municipality was also inclusive in his delivery. On security issues, it was stated that the number of police personnel who present as at 2014 was 137 and the ratio of the police to the citizens was 1 police personnel to 1,211 people.

After Mr. Abdul’s presentation, an opportunity was given to the participants to question, comment, suggest, recommend as well as brainstorm to select two projects out of the aforementioned areas. Mr. Mustapha Yeboah was the first to submit on the issues on board, he stated that LANET during 2014 LANET was operating in Municipality without any partitioning (North and South) but currently the Municipality have been partitioned so he want to know how the project would be. Mrs. Beauty came in with a submission that the data they presented on was for Techiman Municipality.

Mr. John of COPIO also expressed great concern on the rate at which burglary and theft have become rampantly abnormal in the municipality of which he has been a victim. Mrs. Beauty raised an eminent suggestion that members should brainstorm and select projects which would have a felt impact both in the short and long term without demanding highly financially. In addition, Mr. Sarkodie the Chairman of LANET sided with Mr. John on his concern raised on security in the Techiman Municipality.

A rejoinder was furthermore made by Mr. Mustapha which was on the efforts made by LANET to get on board Television and Radio Stations to broadcast its projects to the general public. Mrs. Narteh came in and said that LANET has not dealt with GACC well because they are not aware of that opportunity and she pleaded that LANET should make them aware so they could also tell the donors of that.

As the meeting proceeded, sanitation was mentioned among the proposed projects to be selected and executed by LANET with support from GACC and CDD. Mr. Addai Kusi one of the participants did second the sanitation project, he urged that the project should be prioritized and all inclusive, thus including market women who are among the principal generators of waste in the municipality.

Another participant also added to the voices on security issues in the municipality. He said LANET could lobby with the Assembly and the security agencies to strategize on the plans such as instituting community volunteers and other watchdog groups to combat crime in the municipality. More so, the chairman commented that the community volunteerism might require other logistics which LANET might not be able to fund. Additionally he stated that criminals these days mostly use sophisticated gadgets in their operations and therefore combatting them requires a very high level of intelligence and logistics.

The participants were made aware that the projects are mainly of advocacy in nature and LANET is just to serve as a facilitating organization. Mr. John highlighted again that the citizens should be made aware of the “I am Aware” project and added that every security related institution would be very glad when the platform is created for them to educate the populace on security issues. Moreover, Rev. Matthew Dapaah added his opinion to those who share the concern on security issues in the Municipality, he indicated that security is critical in our lives today since this is an election year and we require active protection and security eminently.

Notwithstanding, a participant wanted to know the budget and allocations for the projects but Mrs. Beauty stated that the earlier decision made by CDD Ghana did not include Techiman among the selected areas for their projects which are six districts from Central, Western and other Region. It was through negotiation that GACC did convince CDD Ghana to include LANET Techiman in the “I am Aware” project.She therefore pleaded with the participants to design a budget which would by feasible and easily funded for the proposed projects. She also proposed for the signing of an MOU between LANET and the media houses in Techiman.

Upon deliberations, the participants unanimously endorsed sanitation and security as the key prioritized and pressing areas. Mr. Kooson moved for the closure of the meeting if there were no other issues of concern, he was seconded by a participant and therefore the house accepted that the meeting should be closed. The meeting ended at exactly 11:37 am and was preceded by a short prayer by Rev. Matthew Daapah the Financial Secretary of LANET. Group photography and interview of participants were done by the officials of GACC afterward.