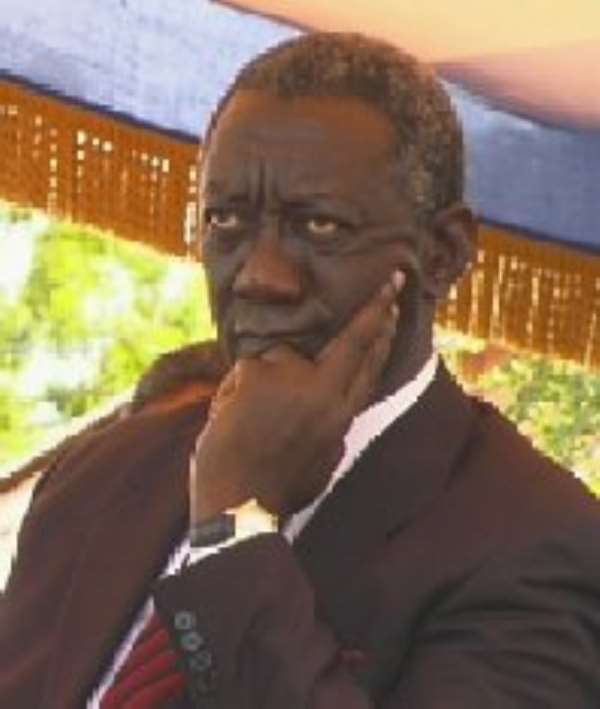 Subsidising petroleum prices and Anane-like expenditure is forbidden Months after President Kufuor had personally brought his huge personal influence to bear on the International Monetary Fund (IMF) to allow for a short postponement of the date for the implementation of fuel price rationalizing agreement, the commitment by Kufuor for 15th February, has arrived. Fuel prices, must now go up from today, and not a fortnight longer because of its withering implications. The price for a litre of the precious fluid is ¢7, 000.00 or ¢28, 000.00, (for a gallon) representing a forty percent increase. That, Chronicle has gathered, is the figure that Government and experts from the World Bank have set, but for President Kufour ever mindful of the impact on the ordinary people and its potential political implications, the figure of C25, 000.00 is what he is pushing, though the matter must now be out of his gentle hands. From several checks with relevant sources including authoritative IMF officialdom, the time to “bite the bullet” (to use President Kufuor's words) is now, because the risk is almost suicidal for a country like Ghana, which is at the mercy of the Fund and its development partners. The budget which is to be out in the last week of this month, can only move if Ghana goes ahead with this crucial phase of deregulation, which can then enable the Fund and its partners to release funds to support every sector of the economy, sometimes with up to 72 percent of budgetary requirements. For example, where the Ministry of Tourism, the most impoverished Ministry requires c2 billion, Fund and partners will kick in c1.4 billion.

It was the former Minister of Finance and his colleague from the Bank of Ghana, Dr. Paul Acquah who were dispatched by Government to go to Washington and negotiate terms for IMF's continued support for the country's balance of payment deficits and budgetary requirements. The deregulation programme with the IMF should have begun some time around October last year, but was correctly adjudged by the Government as too close to the elections, judging by the experience of the mass disaffection against the NDC which failed to press ahead with the same programmes in the latter part of its reign. These included the deregulation programme, the HIPC (Highly Indebted and Poor Countries) and other related programmes.

The Fund exacted its punishment and withdrew funding which had a disastrous effect on the economy, some of those were the rapidly depreciating cedi against all currencies, the almost ritualistic increases in the banks' lending rates, ultimately leading to the party's defeat in the elections.

Mr. Matts Carlson, the World Bank Resident Director told The Chronicle yesterday that the NPP government had committed itself to getting proper financing in place and stop subsidizing petrol prices. This was a decision, which was driven by the desire to use public funds on projects that will benefit the ordinary Ghanaian like: water, schools, education, and roads. “We are ready to finance Government on long term basis if the money they raise through taxes are put to proper use…Its more effective…No country reached middle income status by subsiding petroleum prices.

Even the previous NDC Government realized that and recognized the need to remove subsidies.” Mr. Carlsson explained that it is only logical that it is the consumer of the fuel who should pay for it, and not Government. The NPP Government, he noted, has also recognized this and decided to introduce competitive element into the equation.

He said the Bank could help bring in new investment to the Takoradi Thermal project and that they were also preparing for a major new distributor for the West Africa Gas Pipeline project.

Essentially, the NPP is pursing the programme that the Fund had with the previous Government but which lacked the political will to 'bite the bullet'. On top of that, the NPP leadership had a tough and adroit tactician in the person of the first Finance Minister, who stroked the Fund's directors and twisted their arms to relax even the all important counterpart funding requirement which made it almost impossible for the NDC Government to access funds for development.

Messrs Maafo and Acquah's brief to the Fund in Washington was that they would go ahead with all the programme content including power sector reform programme, the Procurement Act, the Road Fund Levy, and educational reforms.

Though it was widely rumoured that the King of Ashanti had gone to lobby the World Bank for a postponement of the deregulation programme, Fund sources denied that there was no truth to those speculations, and that it was the President himself who urged the Fund to allow for a deferral to February 15. Why the IMF may pull the rug Subsidising petroleum prices and Anane-like expenditure is forbidden! The NPP Government had a streak of happy coincidences which helped to make the economy stable and allow for more time to prepare for the deregulation. First was the windfall in cocoa price earnings, which combined with a huge jump in foreign exchange transfers from Ghanaians abroad, to help build and stabilize the foreign exchange scarcity situation. The situation with Akosombo also dramatically improved with the water levels going up considerably, thus loosening the pressure on Government to subsidise the fuel prices for VRA, particularly at the Thermal plant in Takoradi.

It was as if the NPP had divine approval. That enabled Government to cushion the effects of the subsidies.

The receipt from subsidies for the year 2004 alone was c1.8 trillion (petroleum taxes and reconstruction levies and other ancillary taxes).

That compared with the HIPC reliefs, which totaled c1.9 trillion. That according to the development partners, and rightly so, should go to building bridges, schools and clinics and not go into paying for subsidies for fuel and the costly extra marital affairs of Government Ministers like Richard Anane, funded with receipts that were due Ghana Airways.

This week, all the Fund is watching closely with its fingers on the trigger. Once they pull the rug, all the partners simply follow suit and Ghana will go back to the Stone Age. The partners and coordinating donors include Canada, Denmark, France Germany, Japan, Italy, Switzerland, UK and USA for the bilaterals.