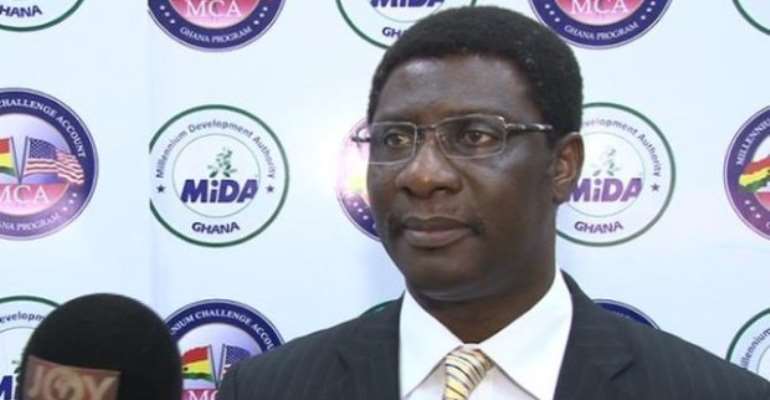 As the Millennium Development Authority (MiDA) plans to fast track the process to announce a concessionaire of Electricity Company of Ghana (ECG) in the shortest possible time, there have been a number of efforts by workers of the company to obstruct the process.

The Journey to the concession deal for the power company has been marked by vehement opposition from ECG Staff who are insecure about their jobs and the future of the company.

These has resulted in a number of strike actions and demonstration against the government and senior managers of the company.

Again, to this is a court case filed against the deal by a concern Ghanaian. But, MiDA described the suit as lacking merit.

Ing. Owura Sarfo admitted that the authority has been served with the suit, but sees it as incompetent.

“We have been served a copy of the suit. I will not go into the merits of the case because the case is in court. But all I will say is that that suit is incompetent, that suit is of no merit and that suit is totally false,” he said to Economy Times.

According to him, the allegations set in the suit are false, since MiDA has undergone all the necessary requirements and legal procedures needed to bring the Ghana Power Compact II into force.

However, the Authority, fortnight ago declared that, Ghana has qualified after going through all vigorous scrutiny and standard criteria for assessing the country’s qualification for the second Millennium Challenge Compact.

MiDA in a statement last week stated, “The MCC has confirmed that the Government of Ghana has met all requirements and the Compact entered into force as of Tuesday, September 6, 2016”

“I am happy to advise that yesterday we met all the conditions precedent to Entry into Force of the Compact and submitted all the required documentation in that respect,” Ing Owura Sarfo, Chief Executive Officer of MiDA said.

He added that the Government of Ghana now has five years to implement the Compact Program.

The MiDA boss explained that there is nothing to fear about government's plan to concession ECG stressing that some aspects of the power distributors operations are already in private hands. Plans to find a private company to invest in ECG received a boost on Wednesday, September 7, after Government satisfied the conditions required to access US$498 million.

The Economy Times, has also gathered that, the Selection Team of Experts working to select a company to be the concessionaire of the management of the ECG will declare the very luckiest company from among the over 60 companies that expressed interest in the Private Sector Participation (PSP) deal.

Information available indicates that, the Millennium Development Authority (MiDA) has shortlisted six, out of which one will eventually be selected as the concessionaire.

The information further indicated that, two of the companies are consortiums while the remaining four are bidding individually.

The two consortiums have Ghanaian addresses, an indication that they are registered in Ghana and probably have Ghanaian interests.

The document is titled ‘Concession for the management of, operation of, and investments in the electricity distribution business of the Electricity Company of Ghana, Pre-qualification of applicants and release of RFP’.

According to the document, the request for proposals document was issued to the shortlisted entities on Tuesday, August 30, 2016.

But, MiDA requires that the acceptable PSP should have local participation at both ownership and management levels. It explained that the shortlist was arrived at after the completion of Evaluation of Pre-Qualification Applications.

In all, 11 companies took part in the Request for Qualification for Concession for the Management of, Operation of, and Investments in the Electricity Distribution Business of the Electricity Company of Ghana, for which submissions closed on May 9, 2016.

It is believed that, the concession should take off in January 2017 barring any unforeseen circumstances.

On the employment security of the worker, the Authority has insisted that the concession of the ECG under the Power Compact II will not lead to a retrenchment exercise.

According to MiDA, the agreement has a clause that bars the concessionaire from undertaking a retrenchment exercise in the next five years.

The Public Utility Workers Union (PUWU) has kicked against the concession, stating that ECG workers will be laid off once the process is completed.

The Chief Executive of MiDA, Ingineer Owura Safo stated that the concession agreement will rather create more jobs and not result in a retrenchment.

“Unlike Ghana Telecom it was determined right from the very beginning that ECG was not over staffed. They didn’t have more people than they needed and the bases of that decision was made that there shall be no retrenchment,” he said.

Mr. Safo maintained that the new managers will inject efficiency and turn around the operations of ECG to make it profitable. “The concessionaire is coming to reduce inefficiency.

“There will be improved performance and reduction in the current losses of ECG leading to a progressive lowering of tariffs,” he said, adding that “government will also continue to purse rural electrification under the concession” He stated that extensive consultation has been undertaken to allay the fears of the workers but some of them have reacted negatively due to misinformation.

Under the Power Compact, six projects will be implemented to address the root causes of the unavailability and unreliability of power in Ghana The project include ECG Financial and Operational Turnaround Project, NEDCo Financial and Operational Turnaround Project, Regulatory Strengthening and Capacity Building Project, and Access Project. The rest are Power Generation Sector Improvement Project and Energy Efficiency, and Demand Side Management Project.