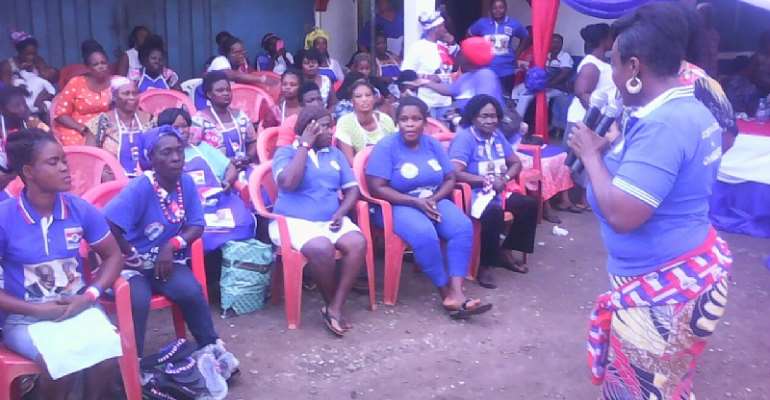 In her bid to encourage women in the Ashanti Region and across the country, the National Women's Organizer of the opposition New Patriotic Party(NPP) Mad. Otiko Afisah Djaba, has launched a novelty programme dubbed 'Town Hall Meetings' with women groups and associations in the country.

The program, which is aimed at highlighting some of the major economic challenges confronting the country, is also geared towards resourcing women in the country with the requisite knowledge and information so that they can also contribute towards the much needed change ahead of the December 7 elections.

It also involves meetings with all women groups and supporters of the party in the various constituencies across the country to deliberate on challenges facing women as a result of the poor economic policies and programmes under the current leadership of the NDC led by President John Dramani Mahama.

Mad. Afisah Djaba is currently in the Ashanti Region and has been touring several constituencies together with her deputy, Diana Karikari, the deputy Ashanti Regional Organizer and other executives in the region.

She has been meeting market women, hairdressers, seamstresses, food vendors and young girls.

Addressing one such meeting at the Asokwa Constituency in Kumasi on Thursday, the NPP Women's Organizer observed that women in the country would be the biggest beneficiaries should NPP win this year's elections.

According to her, women are currently bearing the brunt of the incompetent Mahama-led administration because most of them are directly affected by government's harsh economic policies.

She observed that with women virtually playing the role of domestic managing taking charge of the household economy, they are best placed to tell best the negative impacts the current economic system was having on Ghanaians in general.

Mad.Afisah Djaba said there was therefore the need for women to be encouraged to actively participate in the current political discourse and contribute their quota towards the clarion call for change of leadership.

Also in attendance was the MP for Asokwa, Mad. Patricia Appiagyei, who described the move as a positive step towards empowering women and encouraging them to rise up for change.