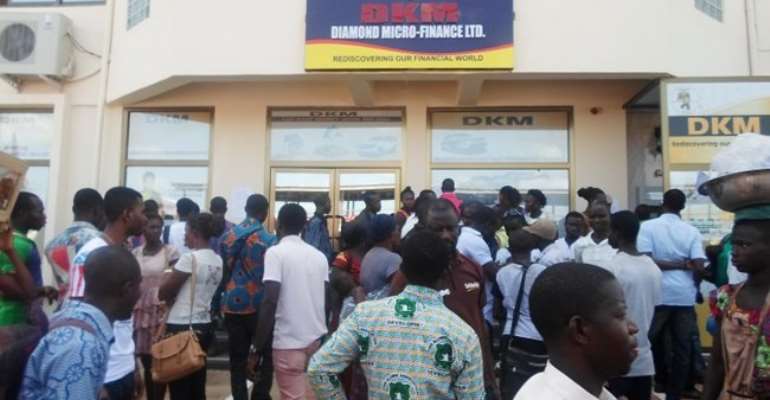 Customers of micro-finance companies who lost millions of cedis in the biggest financial scandal in Brong Ahafo Region are accusing the police of scuttling their impending demonstration, Saturday.

The aggrieved customers planned the regional demonstration Saturday to protest what they say is government's lack of commitment to retrieve their monies from the micro-finance companies.

Weeks after losing their monies to DKM, God is love, etc, president John Mahama ordered the freezing of accounts of the owners as well as the auction of properties to pay the debts owed the customers.

The customers are however yet to receive their monies, months after the president gave that instruction.

With president John Mahama set to the lead the NDC manifesto launch on Saturday, the aggrieved customers planned to embark on their demonstration same day in order to show their displeasure to the president.

But the police have sent a motion of notice to the court, seeking an injunction on the impending demonstration.

The notice, a copy of which has been intercepted by Joy News, said, with the demonstration coinciding with the launch of the NDC manifesto, it is likely there will be breach of peace in the region.

The notice of injunction said the police will provide security to the demonstrators at another date.

But the organizers of the demonstration are not happy with the turn of events.

One of the organisers Maxwell Mahama told Joy News' Evans Mensah he is surprised at the conduct of the police.

According to him, they followed due process by the informing the police about the demonstration and provided the date and routes for same.

He found it weird that all of a sudden, the police will spring a surprise on them with a notice of motion seeking an injunction on the demonstration.

He said as law abiding citizens they have forwarded the motion to their lawyers for advice and are ready to heed to it.

Alfred Tuah Yeboah the Brong Ahafo President of the Ghana Bar Association, who also doubles as lawyer to some of the victims of the micro-finance fraud said the police are trying to stop the demonstration in a smart way.

Even though the motion for the injunction is set to be heard on the 20th of September, three clear days after the date for the demonstration, lawyer Tuah Yeboah said by law, the action for which the motion for injunction was filed cannot be undertaken.

This means, the demonstrators cannot hit the streets until the case is heard on Tuesday.

Thousands of customers were duped by micro-finance companies DKM, God is Love Fun Club, Jasta Motors in a financial transaction that promised interest rates of about 80 per cent to depositors. However after years of investment the companies have failed to pay the amount invested as well as the interest to the customers.

Police smoke out Shatta Wale, handcuff him for faking gun at...
7 minutes ago