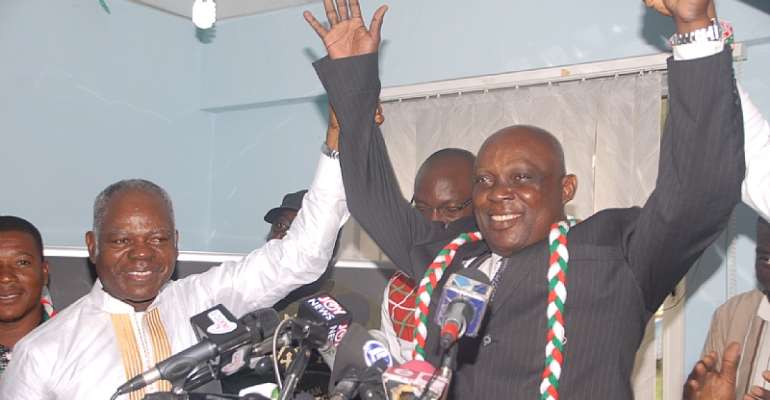 The flag bearer of the People's National Convention (PNC), Dr Edward Mahama, yesterday named a renowned economist from Adidome in the Volta Region as his running mate for the 2016 general election.

Sixty-year-old Emmanuel  Amenuvor  Anyidoho,  who has masters degree in economics from the University of Ghana, was selected from a number of qualified candidates because of  his background as an economist and his enormous experience in public office. He has worked at the Ministry of Finance with portfolios as deputy head of the Expenditure Monitoring Unit and Liaison officer to the Bank of Ghana to assist him (Mahama) to put the 'tattered' economy back on track when he is given the mandate to rule.

Unveiling his running mate at a press conference which was attended by all the party gurus, Dr Edward Mahama said apart from the knowledge on how to fix the economy, Mr Amenuvor  Anyidoho has an unblemished integrity as a civil servant which is an important ingredient for good and participatory governance.

According to him, incumbent President John Mahama, presenting highlights of his manifesto on Tuesday, admitted that his party could not meet its stated targets in its 2012 manifesto.

He noted that in 2012, the ruling National Democratic Congress (NDC) under John Mahama promised to eliminate 60% of schools under trees in the country but the president also repeated the same promise in the party's 2016 manifesto – which is yet to be launched.

Dr Mahama did not understand why Ghana, which is blessed with rich human and natural resources, continues to face a lot of socio-economic problems, stressing that Ghanaians must be wide awake and reject politicians who come to them with unrealistic promises.

He said an Edward Mahama government would resuscitate all collapsed public industries, make sure there is sustainable supply of electricity and also provide jobs for the teeming unemployed youth.

In his acceptance speech after being endorsed the vice presidential candidate for the PNC, Mr Emmanuel Amenuvor Anyidoho said he would work hard to ensure that the PNC wins the forthcoming general election.

He took the ruling NDC to the cleaners for grinding the economy to a virtual halt through unrestrained and high expenditures far above what the country gets as revenue.

He said that over-expenditure by the NDC government has rendered the monetary policy ineffective, resulting in high interest rates, while crowding out and killing the private sector which is the only viable hope for the growth of the economy.

He said a PNC government would install a new Ghana standing on three pillars – a new beginning, new deal and new force – which he claimed had been enshrined in the PNC manifesto.

The choice of this economic luminary who had his secondary education at the famous Achimota School, brings to two the number of running mates coming from the Volta Region.

Dr Paa Kwesi Nduom of the Progressive People's Party (PPP) has also chosen a female running mate who comes from the region.

The Volta Region has traditionally been voting for the ruling NDC.

Fuel price hikes: When did you realise you don't control oil...
11 minutes ago