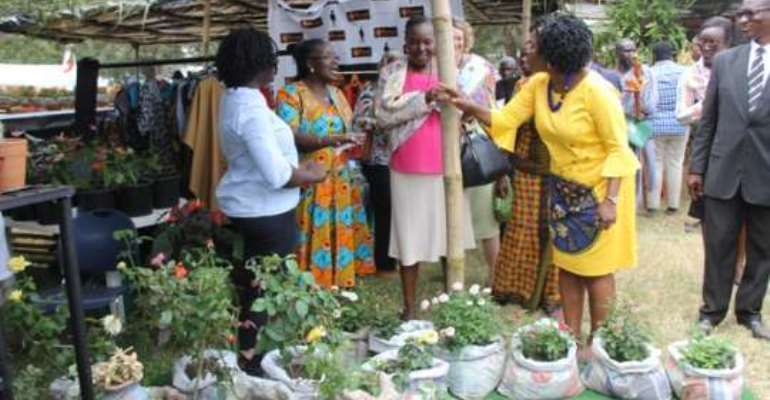 Ms Cobbah noted that there is no clear cut policy on the sector aimed to improve the horticulture and floriculture industry.

Ms Cobbah in an interview with the Ghana News Agency at the fourth edition of the Ghana Garden and Flower Show at the Efua Sutherland Children's Park in Accra said Ghana has the potential of becoming a tropical paradise of choice and a hub for ecotourism in Africa if much attention is given to the sector.

She expressed optimism that just like Malaysia, Ghana could become a treasure trove of diverse flora and fauna for economic improvement.

She said more than one million visitors across the world visited Malaysia during its annual flower show in June.

The CEO said in Ethiopia workers in the industry are given a task rate, whilst the Malaysia government also gave the private sector organisation that started the fair, a vast piece for the fair which had contributed immensely to their economy.

She cited Kenya, South Africa and Ethiopia among other countries as major exporters of flowers.

She said with the rich soil and other natural resources, Ghana could also export flowers on a large scale to augment the economy and provide more jobs.

'People are becoming conscious that beautiful gardens contribute to the creation of a peaceful and serene environment and Ghana's attractiveness will be further enhanced and reinforced, if we pay more attention to nurturing our flora and fauna,' she stated.

'It's not just a government decision but a national decision because we saw gold in the ground and took a decision to invest in that and develop it, and we saw Oil and Gas and we have gone after it, we are saying there is flora and fauna also, there is gold in flowers.'.

She said apart from the benefits to individual livelihoods, many industries such as airline, hospitality and creative arts benefit from it, and it has the potential of contributing immensely to the national economy.

She stated that schools are beginning to take more interest in gardening and 'last year the University of Ghana did an inter hall gardening completion and that is what we are looking forward to expand to other Universities', she said.

According to the CEO, the annual event, an initiative of Strategic Communications, aimed at unearthing the untapped potential that abounds in Ghana's flora and fauna resources for aesthetic and commercial purposes.

She said the annual event has been geared towards ensuring a cleaner, greener, healthier and wealthier nation through enhancing horticultural and floricultural activities.

This year's event is on the theme: 'Dream It, Discover It, and Live It,' with a special focus on Ecotourism and the 5Ps of the United Nations Sustainable Development Goals (SDGs), (People, Planet, Prosperity, Peace and Partnership) and intended to be used to contribute to the realisation of these goals locally.

The event has activities such as an exhibition, workshops for children and adults, a conference, Jazz Night, a fashion show as well as a party in the park and attended by florists and horticulturists botanists, home owners, real estate developers, garden and flower lovers as well as, policy makers and government officials among others.

The workshops aspect of the show provides hands on training on various subjects to acquire new skills to earn an income.

They Sent 'Dante Crocodiles' To Our Area To Scarce Us — Ajum...
49 minutes ago