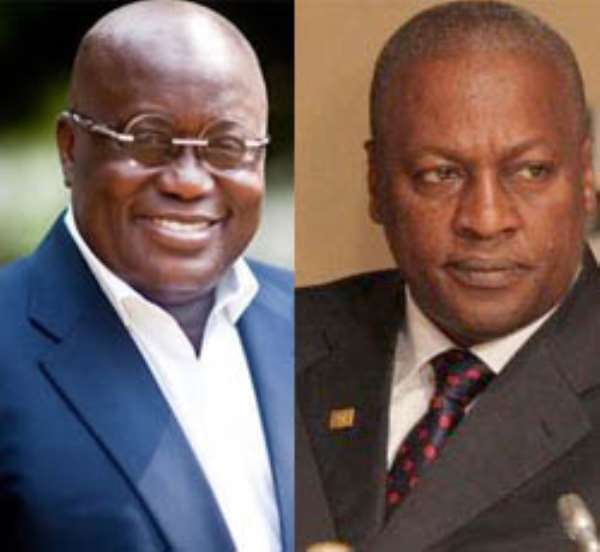 Folks, I’ve been contacted by some prospective voters to answer their concerns on what criteria should inform the electoral decision that they make on December 7 to retain the incumbent John Mahama in office or to ditch him for the NPP’s Akufo-Addo. I have responded to them on the basis of my knowledge about their performance in public office, considering where they came from to be where they are today, what they have either done or failed to do thus far to prove that they can be trusted to keep Ghana on an even keel or discountenanced as mere irritants seeking power to serve interests known to them and their handlers. It’s all informed by a clear understanding of what they did where they started from to be where they are itching for. Of course, I have done so with a clear conviction that Mahama transcended lower-level barriers to be Ghana’s President, something that the NPP’s Akufo-Addo has been struggling with all these years. Any bias here? Up to you!

We begin by saying that in all that some of us have been writing on and hitting hard at, we've sought to draw attention to the fact that governance in this 21st century is not a (Boston) tea party to be attended by just anybody, dressed anyhow and making all kinds of noise to attract attention. It is a serious business to be done by those who have acumen to do so, based on their record as people tried and tested to keep nation, country, body and soul together so the country remains what it was before then and will be hereafter.

Those conversant with Ghana’s history know the truth: that the old and prosperous Ghana Empire vanished into thin air because it was not a “homogeneous entity” (as the NPP’s revisionist historian, Adu Boahen, recorded it). And the NPP people are proud that it was their Dr. J.B. Danquah who gave the name “Ghana” to the territory that had before Thursday March 7, 1957, been recorded as the Gold Coast. They have prided themselves on that fact and sought to be placed in power to call the shots, forgetting that times have changed.

In our comments on happenings, we've made it clear that governance, especially in our part of the world, where there is much suffering in the midst of abundant natural and human resources, hasn't served useful purposes because of many factors, especially those that border on the human aspects.

We've also tried hard to analyze the performance of the various leaders and governments that we've had in Ghana since independence. Of particular interest to us now as we make the crucial decision for leadership is the performance of the individuals leading the political parties toward Election 2016. They are mostly not new to us. We have records on them but should be interested in knowing more than they have presented so far or what their buffs have stood their grounds to defend about them. I have my own impressions, which I spill out now, especially about the leaders of the NDC and the NPP, who are undoubtedly the front runners.

I begin with John Mahama and the NDC front. Remember that the NDC is an organism that must grow and shed off what doesn't work for it over the period. So must the other political parties struggling to kill it. Do you, for once, ever pause to find out why the NDC still grows from strength to strength despite all the massive machinations against it? For the sake of the history that the peeved NPP people cannot write, let us say here that before the emergence of the Rawlings phenomenon, there were only two main political streams in Ghana: the CPP and UP. When Rawlings stamped his authority on the system, everything changed, pushing the CPP and UP out of joint. The NDC has remained potent, leaving the CPP and UP to their own fate. The bitter truth is that the UP faction (actualized by this despicable NPP of our time) would wish the NDC dead. Wishes have refused to be horses here for beggars to ride.

Let me just refer you to what the senile J.H.Mensah said at the time Kufuor won the elections in 2000. (Flashback: As the Finance Minister of the Busia government, this same J.H. Mensah had orchestrated the payment of salaries in advance for Busia and his team, including John Agyekum Kufuor. And Kutu Acheampong dealt them the blow that they least expected, his being one of their own but turning against them for their nation-wrecking exploits). Mensah had told the whole world that by the time Kufuor would complete his first time in office, the NDC would have been dead and gone. And everything that Kufuor did to spite the NDC aimed at killing it. Did the NDC die? No!! Why? Go and figure it all out.

The NDC remained resilient and sprang back to put the NPP where it never thought it would be because of all the massive support that its props in every field of national life place it. Is it the judiciary? The mass media? The business sector? The security services? The criminal industry of armed robbery and open murder for political purposes? Smuggling? The drug business? Just anything to sustain it?

My friend, the NDC transcended all that stupidity to trounce the NPP and its Akufo-Addo at Elections 2008 and 2012 and will continue to do so because it capable of doing so, being the choice of the masses. The Rawlingses had spearheaded its activities up to Election 2004 but have lost traction now, given the fact that their insatiable personal ambition for power has no place in our contemporary politics, which they can't accept but which is a reality that has for some time now reduced them to absurdity.

When was the last time any of them said anything worthy of public attention? Nana Konadu and her NDP have folded up because those supporting have read deeper meanings into the duplicity and found better ways to make their presence felt.

But the NPP people haven't learnt any useful lesson in how to tap into the Rawlingses or to avoid them for their own good. Of course, as the intelligent observers of human behaviour have noted, it is only one bad nut that spoils the taste of the entire soup (Chinua Achebe on my mind here).

The way the desperate NPP and its Akufo-Addo are snuggling to him for nurturing speaks volumes. In any case, the Lion of Gonja did without the Rawlingses at Election 2012 and will do so again at Election 2016. Let Akufo-Addo go and suck anything govern him by the Rawlingses. He will not get the succour to survive at Election 2016 because he lacks substance. The election is about substance and what one's performance in public office beams across to the electorate. Should Akufo-Addo be honest to do a serious self-introspection, he should know that all the 12 years that he had spent as the MP for the Abuakwa area gave his people nothing to write home about. Even when placed in the high echelons as Attorney-General and Minister of Justice, he did nothing remarkable to reform the Ghanaian justice delivery system. He is better known for the shoddy move by Kufuor to pack the courts with political activists disguised as judges. I hope Justice Acquah and all others of his type who benefited from that laxity will come back to tell us that they regretted being so abused.

There is a lot more for one to raise regarding how the electoral decisions to be made by the voters will be informed by hindsight as far as the status of Akufo-Addo and President Mahama is concerned.. It is not about so-called personal success in private professional life. Even here, Akufo-Addo has more questions to answer because of the cloudy nature of his qualification to practice law in Ghana, knowing very well that he hadn't been certified by the institution t6hat admitted him for legal training. A huge credibility problem here won't serve him well.

Just a quick one here. President Mahama is also the son of an accomplished politician who served under Nkrumah but was so self-effacing as not to be noticed as is done Akufo-Addo's father. Indeed, Akufo-Addo's father took bold steps to shield him but couldn't succeed because his own streaks of deviance overpowered his father's cushioning.

Talk about his withdrawal from the prestigious Oxford University after dismally obtaining a 3rd class in Economics at the University of Ghana and teaching at the Accra Academy, where he acquired the skills of wee-smoking that would push him into the records of Wikileaks and the United States Embassy.

Too deplorable, not to talk about his sordid immoral encounters with under-aged peanut sellers (Maiguziwa) parading the East Legon and Nima estates area where his father had established a safe haven for him. Such irresistible immoral instincts surface anyhow, anywhere, as happened on the occasions when he was captured fondling the breast of a GBC worker and patting the backside of the late Theresah Tagoe. Too much to say at this level. Let Akufo-Addo go to court on this score.

We also have evidence of the NPP front’s damning of President Mahama as a “womanizer” who has many children out of wedlock. But there is nothing to damn him in his official capacity as the politician ruling Ghana. So, anything about that blot vanishes. He is in office, posing serious challenges to his opponents. What can they do to dim his light apart from mobilizing their uninformed followers to indulge in negative politics? That’s their lot, not mine.

Let's return to the area of performance in public office as a major criterion for the electoral decision that the voters will make. Even before Akufo-Addo's 12 years as an MP, President Mahama had already made his mark. He has not been well-received by the people of Akufo-Addo's stronghold, but he has solved the pertinent problems negating their lives (providing potable water and ensuring that they live their lives in some measured comfort. Will they push ethnicity to the background and do politics properly? It is up to them and their Okyehene).

Many more issues come up beyond this point. The truth, though is that the Lion of Gonja has what Akufo-Addo lacks, which explains why he is in power and doing everything to secure a second term on the basis of his accomplishments while Akufo-Addo is desperately running around begging Ghanaians to try him too. And he says he won't stop begging Ghanaians for that matter just because he has found a good way of appealing to them through machinations, including weird promises of one village, one dam; one man one wife; one village one factory; and what else? Such a loony!!

As President Mahama recently said, Akufo-Addo is still stuck to the unproductive archaic ways of wooing voters. He is old and remains a fogey, which explains why he can't adjust to the times to know that winning elections in Ghana goes beyond what he is fixated on. Indeed and truth, he will be poked again where it hurts.

Let him get out of his cocoon to smell the coffee. Unfortunately for him, while he runs away from reality (probably because he is not well-cut-out to face that reality, a lot is happening. All the surrogates doing his dirty political work for him are successful only in undercutting him for Election 2016.

As public intellectuals, have positioned ourselves to see goings-on and will comment on them as we see them define the future of the contestants. No hatred for anybody. Only the facts as we see them will speak. Those who doubt it can set up their own systems for monitoring goings-on to enrich the conversation. Only the best is good for Ghana; not so? Thanks for being with me.