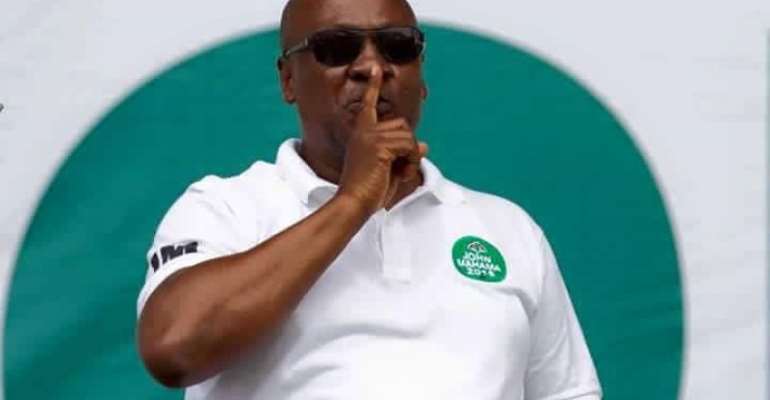 Economy On Strong Footing
Through My Govt's Policies, Programmes

Tuesday, September 13, 2016.
The foregone are samples of verifiable assurances from President John Dramani Mahama, some of them dating back to 2013. Some could have escaped us. We have been so much saturated with predictions and assurances by the President that we can no longer absorb more.

The fact is that a president and his government must be credible, otherwise they would soon lose the confidence of the people, which is what is beginning to dawn on the country today.

We composed this commentary when the President's presentation of highlights of his party's manifesto at the State House was a few hours away.

The euphoria, which such important dates on the calendar of a major political party should have evoked, was absent. But for the media and a few politically active members of society, most people did not care a hoot about the activity.

We should have been excited because the president was going to present alternative programmes he intends unfolding for the country, should he be blessed with an extension of tenure. Whenever any of the two major parties is unfolding such highlights, the people should be excited because it offers them the opportunity to review the contents of the manifesto and juxtapose same with others.

This would enable them to make an informed choice.
Unfortunately, Ghanaians have come to gauge the trustworthiness of the incumbent government through its many unfulfilled promises and predications.

We are bombarded incessantly with stories about the construction of roads, buildings and others, yet the growth which these are expected to trigger never happens.

We are sure that this morning Ghanaians will be discussing – if they care to do so – the highlights of the manifesto which is expected to be outdoored in Sunyani, Brong-Ahafo Region, at a subsequent date.

When citizens are inebriated with unfulfilled promises and predictions, lethargy sets in, including questions about the integrity of government.

Transforming lives and the Better Ghana agenda are both mantras only on the pages of newspapers when they come up for auditing against the backdrop of the realities on the ground.

Another opportunity to rehash the previous predictions about the take-off of the economy is here. Compatriots, it is time to yawn.