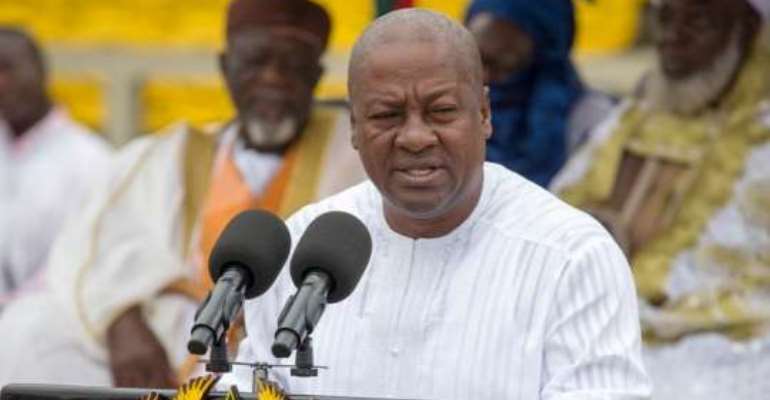 This he said would include the rehabilitation of the railway sector, provision of more buses to ease road transportation and the generation of power for both domestic and external consumption.

"By providing all these opportunities more jobs will be created to offer employment to most of our graduates in the country."

President Mahama who was addressing Muslims at the Black Star Square, in Accra to commemorate their annual Eid-Ul-Adha celebration, said such laudable policies could only be achieved in the atmosphere of peace and unity and called on Ghanaians to continue to live peacefully in all their localities.

The Eid-Ul-Adha is celebrated annually by the Muslims to give praise to Allah and reflect on the sacrifice of the Prophet Ibrahim, who is the Father of monotheistic faith who showed his readiness to do the will of Allah.

President Mahama said the provision of such socio-economic opportunities would transform the Ghanaian economy and have positive rippling effects on the West African countries as Ghana is positioning herself to becoming a net exporter of energy and food.

On the pilgrimage of Muslims, President Mahama said he had directed the Hajj Committee to request for an increase of pilgrims from 5,424 to 7,000 in subsequent years to provide more opportunities for Ghanaian Muslims.

He explained that a number of Ghanaian Muslims could not embark on the pilgrimage this year because Ghana had exceeded her quota, coupled with the massive airlifting of 2,000 pilgrims directly from Tamale International airport.

The President said the increment of the number would enable all those who could not make it this year to perform their Hajj next year.

President Mahama called on Muslims to uphold the peace and unity the country had enjoyed over the years by conducting themselves peacefully before, during and after the 2016 general election.

He said it is the peace and unity Ghanaians exhibited in previous elections that had made Ghana a model of democracy in the African continent and expressed the hope it would be deepened after the 2016 polls.

In a speech read on his behalf Dr Nuhu Sharabutu, National Chief Imam called on Ghanaians to remain calm and united in all events leading to the 2016 general election.

"I am assuring all Ghanaians who were born and bred as one, but belonging to different political parties, different ethnic groups, as well as within the ethnic and religious divide... that we shall unite for a purpose."

He cautioned the media to be circumspect in their daily journalistic practices, as misleading pronouncements could plunge the country into a state of disorder and lawlessness.

The National Chief Imam added: 'The presidential candidates are all Ghanaians and should not forget that they are representing large communities, hence the need to speak well of themselves and refrain from throwing insults against one another."

Dr Sharabutu also appealed to the Electoral Commission to be transparent, accountable and God-fearing in dealing with stakeholders to avoid any form of mistrust after the elections.

He admonished Muslims against patronising the activities of self-seeking politicians who would attempt to lure them into carrying out violence and other nasty deeds that would win them power.