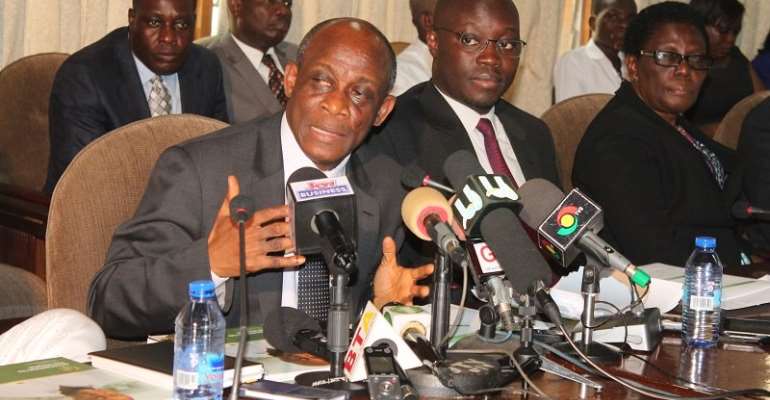 Finance Minister Seth Terkper says Dr Bawumia masked the true state of the Ghanaian economy by being selective in his use of data.

He accused the 2016 NPP Vice Presidential Candidate of using different models in his analysis of Ghana's debt to suit his political objective of making the government unpopular.

“If we are going to use Dr Bawumia's model, let us use it comprehensively because he cannot use other data when it suits his criticism and reverts to his model when it does not suit him,” he told Samson Anyenini Lardy, host of Joy FM/MultiTV's news analysis programme Newsfile Saturday.

Addressing a public lecture held at the National Theatre in Accra, Dr Mahamudu Bawumia concluded Ghana has been built on straw because of the “recklessness” and “mismanagement” of the governing National Democratic Congress (NDC).

He said the NDC has within eight years ballooned Ghana's debt stock by $39billion. President John Mahama alone has added 66 percent debt to the country's public debt, he claimed.

But Mr Terkper said the NPP Vice Presidential Candidate criticism of the state of Ghana fell short of being objective.

He said one flaw of Dr Bawumia’s argument was seen in the way he accused the NDC of borrowing “$39.9 billion, on one hand, without disputing the basis upon which the figure for the GDP was computed using a model which is not his.”

Contratry to the analysis, he said the NDC has reduced Ghana’s debt from the estimated $40 billion to $28 billion which is a “remarkable performance” achieved by the government.

Mr Terkper said the very data the economist is bastardising was the very one he used when he was the Deputy Governor of the Central Bank. The only thing that has changed is the rebasing which started from 2006, he added.

“This selective use of information is very dangerous we should be mindful of the rebasing in comparing pre and post 2006 data in the country,” he said.

“For example, certain aspect were included in agriculture but when the rebasing was done things changed. This is very important and that is why I believe Dr Bawumia as a professional could have pointed out these things in his analysis.”