Give It To God And Let’s Move On! 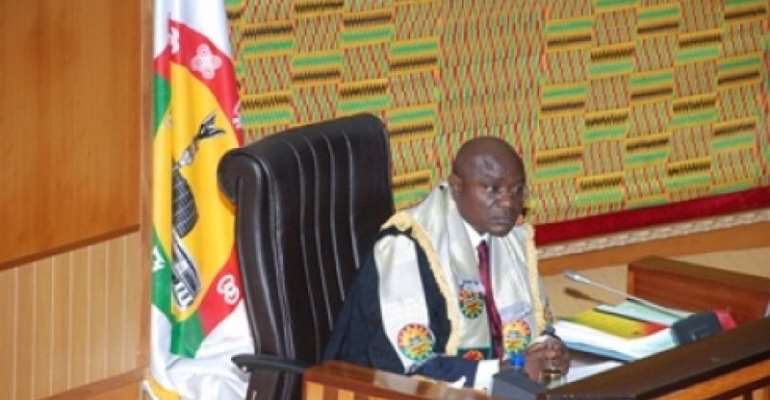 On 3, September 2016, Myjoyonline.com reported that a former Clerk of Ghana’s Parliament, Mr S N Darkwa, had described as an error, the “outright dismissal of a motion brought before [the current Speaker, Mr Doe Adjaho] by the Minority, in respect of the controversial Ford gift scandal involving President John Mahama”.

Mr Stephen Darkwa, who was Clerk of our Parliament from 1961 to 1997 (minus the years of military rule), said, “Parliament is the highest forum to debate matters, and the best the Speaker could have done on the controversial Ford scandal was to have [had] the matter debated.”

He was speaking on Multi TV and Joy FM‘s news analysis programme Newsfile in reaction to the drama on the Floor of Parliament on Thursday 1 September 2016.

“Speaker Edward Doe Adjaho, within 15 minutes, shot down a motion filed by the Minority under Article 112 (3) of the Constitution, requesting a bipartisan parliamentary probe into the circumstances under which a Burkinabe contractor and businessman gifted President John Mahama a Ford vehicle after winning a contract from the government of Ghana,” MyJoyonline reported.

Mr Darkwa explained that it was only when the matter raised in a motion was sub judice (under judicial consideration and therefore prohibited from public discussion elsewhere) that a matter could not be debated on the floor of Parliament.

MyJoyonline pointed out that “by his training” Mr Darkwa was not supposed to publicly criticize the Speaker, even after exiting Parliament. Yet, Mr Darkwa had made his comment “for the public good and for education”. He declared: “The Speaker ought to have allowed the matter to be discussed on the floor… The Speaker has sole responsibility for the admissibility of a motion”, but it “must be done in accordance with the law,” Mr Darkwa said.

It is of great significance that Mr Darkwa came out of retirement to make a pronouncement on Doe Adjaho’s ruling. It is evident that unlike the typical Ghanaian public servant. Mr Darkwa is acutely interested in the continued efficacy of the institution to which he devoted most of his working life. You see, he has authored, together with the first Clerk of the National Assembly of independent Ghana, Mr K B Ayensu, a book on The Evolution of Parliament in Ghana. (Sub-Saharan Publishers ISBN 9789988550769).

Having been publicly rebuked by someone who can be considered an authority on parliamentary procedure, Speaker Doe Adjaho has no leg to stand on. In many democracies, a Speaker who loses the respect of the Minority would resign immediately, for it is in his impartiality towards the proposals of the Minority that a Speaker demonstrates whether he has the fairness of mind required to earn him the trust of those who are enjoined to look to him as “The Father of the House”. Although the executive may not know it, a respected Speaker who faithfully abides by the Constitutional requirement that there should be a “Separation of Powers”, can be extremely useful to the executive.

Under the “Separation of Powers”, Parliament has the authority to oversee the work of the executive and to withhold funds from the executive if Parliament comes to believe that the executive is acting corruptly or with incompetence. Thus, a good Speaker would pay great attention to what is said in the House, and in particular, to “the mood” of the House. For he can convey feedback to the executive – especially the President – that will make the executive think twice about measures it’s taken, or proposes to take, that will not go down well with the people.

Of course, when you have what is known in Twi as a patapaa [someone who acts arbitrarily, without due regard to custom or good sense] Government in power, the last thing it wants is feedback. Such a Government will have no qualms about turning “The Father of the House” into a patapaa Speaker, in line with its own character.

I must say I have not been at all impressed with the performance of the Minority in Parliament over this issue. In view of the Speaker’s earlier performance over the Merchant Bank issue in 2014, the Minority should have anticipated that over the Ford car issue too, the Speaker might want to “guillotine” any discussion of it (as it were). They should, therefore, have evolved a strategy beforehand to deal with such a situation if it did indeed arise. Parliamentary procedure generally and the Standing Orders in particular, afford MPs who are conversant with the rules, an opportunity to “make their presence felt”, if, in their view, the Speaker becomes dictatorial.

In these days of “social media”, there are ways of graphically conveying disenchantment to the populace. For instance, what would the Speaker have done if the MPs who disagreed with his authoritarian ruling had “sat in” and refused to leave the House? Any attempt by the Speaker to have them forcibly removed by the Serjeant-at-arms with the help of the police, would have made great pictures for mobile phone video cameras, through which the event could have been transmitted to the public on Facebook, Twitter, WhatsApp and applications of that type.

The MPs could also have held an ”alternative Parliament” somewhere, at which they would have made all the speeches they had wanted to make, – and more – if the Speaker had allowed them to carry out their constitutional duty of giving voice to their views. Speaker Adjaho had “capriciously” deprived them of the “tongues” with which their constituents had armed them at the last election? Okay – show him and his bosses that the voice of the people cannot be stifled! Sow them that the “voice of the people is the voice of God”!

As it is, I am afraid that, as in so many other things, the Ghanaian attitude of “Give it to God” will prevail. Our MPs, with a difficult general election campaign on their minds, will simply “move on”.

But that would be a mistake. For what Doe Adjaho has done can set a precedent to be followed by the Speaker who will preside over the future Parliament (to which they are busy seeking re-election) if he too elects to act like someone with – a patapaa mentality!