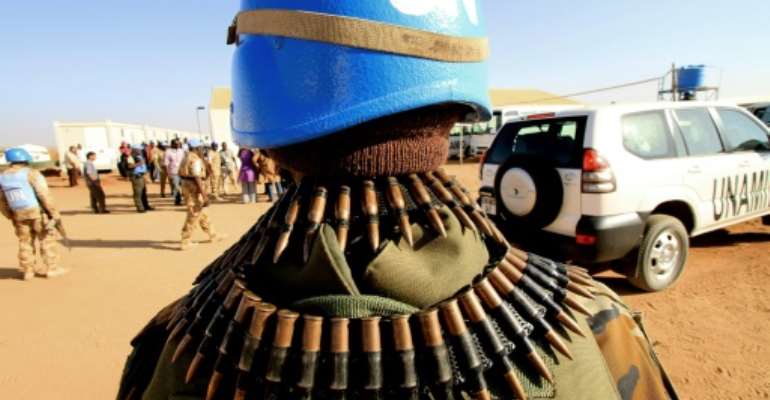 The 12,000-strong UN peacekeeping mission in South Sudan, UNMISS, has faced criticism for failing to stem the latest bloodshed or fully protect civilians during the fighting. By Ashraf Shazly (AFP/File)

United Nations (United States) (AFP) - The United Nations will be asking countries from outside east Africa to contribute troops and helicopters to a new regional force to be deployed in South Sudan, Secretary-General Ban Ki-moon said.

Ban told the Security Council in a report sent late Thursday that the first advance teams of the new 4,000-strong force could begin arriving in Juba by the end of this month.

The council voted last month to deploy the regional protection force (RPF) in Juba, with Ethiopia, Kenya and Rwanda expected to contribute the bulk of the troops.

The new force, which will be under the command of the UN peacekeeping mission in South Sudan, would be comprised of three infantry battalions backed by helicopters, a special forces unit, combat and construction engineers, military police and a field hospital, Ban said.

Countries of the East African IGAD bloc "have indicated their ability to generate most, but not all, of the infantry component of the RPF and some of the enablers," Ban said.

"This means that TCCs (troop-contributing countries) outside the IGAD Plus countries would need to be approached to cover the gap in capabilities," he added.

The regional force is authorized to use all necessary means to ensure security in Juba, including at the airport and to help protect UN premises.

African leaders called for the force after heavy fighting engulfed Juba in early July, setting back efforts to end the devastating war that has raged in South Sudan since December 2013.

Ban said he would report to the council next month on whether South Sudan's government is cooperating with the United Nations on the deployment of the regional force.

The council has threatened to impose an arms embargo if the Juba government blocks the deployment.