Over To You Veep! 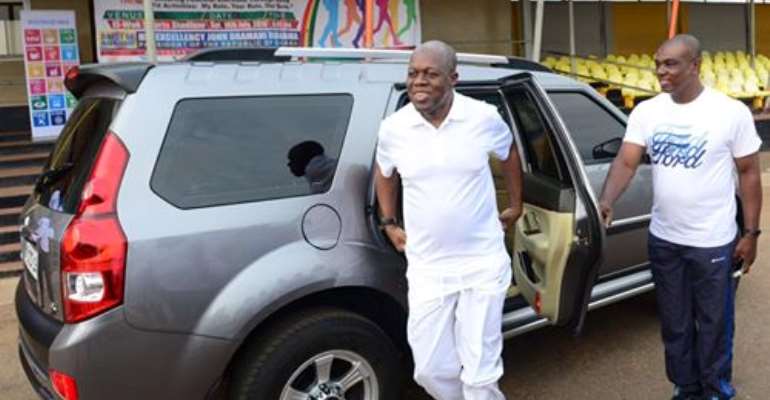 Vice President Paa Kwesi Amissah-Arthur appears to have been pricked into action after a long Rip Van Winkle slumber at the helm. Even before traveling up North to seek audience with Gonja chiefs in a bid to reverse the inroads made by the New Patriotic Party (NPP), he had served sufficient notice of what he intends doing with his party's main opponents.

He said that he would deal with the NPP by matching them boot for boot.

Thankfully he has a golden opportunity to make himself relevant to the faltering campaign of his boss.

He must return to the Central Region to see whether he can do something about the            below-average reception his boss garnered in that part of the country, even after the busloads of persons from outside the venues of the rallies of empty promises.

But more importantly, he has been offered an academic opportunity to deal with Dr. Mahamudu Bawumia, a challenge if you like, to prove his mettle. If he handles this well – which many doubt he can – he should alter positively the impression many Ghanaians have about him. He needs this impression alteration so he can shore up his dwindled deference.

Indeed, he himself appears to have appreciated his challenges, hence his recent movement to areas where his boss had previously traveled to. This is not about releasing pigeons at the Independence Square, which refused to fly in protest anyway. It is about macro-economics and why the fortunes of the country are maintaining the downward spiral in spite of so much financial injection from the capital market and so-called IMF intervention.

The vice president should rather respond to the issues Dr. Mahamudu Bawumia put out yesterday to the admiration of Ghanaians and not the gutter approach: the preserve of his propaganda boys.

This is a subject which his boss would look up to him to deal with – the area being the preserve of the initiated such as him. We do not doubt his pedigree to respond appropriately. Allowing the propagandists to wade into it would kill the fun. Ghanaians want to see Paa Kwesi respond. After all, he has longed for such opportunity and Dr. Bawumia has presented one without plodding and gratis.

The theme of the lecture, “The State of The Ghanaian Economy: A Foundation of Concrete or Straw,” which the running mate to the flag bearer of the NPP joined a series which have now come to represent academic critique of the faltering economic policies of the NDC government.

Yesterday, Ghanaians once more had a rare opportunity of appreciating the depth of the country's economic challenges and why it would take a paradigm shift for us to witness growth in our fiscal circumstances.

This is a subject beyond propagandists because as Dr. Bawumia once remarked, when fiscal matters are taken over by lies the truth will soon be out.