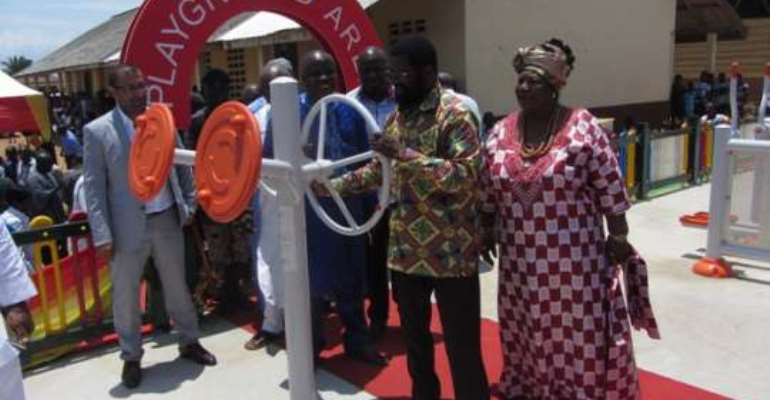 It was constructed by the Turkish Transit Group Company Limited who are in the country to explore investment opportunities.

Mr Vanderpuije advised the school children to take advantage of the facility to exercise regularly and improve their health to enable them to study with ease.

He said the provision of such social amenities supports the Government's policy of protecting the young ones from indulging in anti-social practices and to mould their character for a better future.

He said the provision and improvement of educational infrastructure had been his focus during his tenure as the MCE and mentioned the Millennium City Schools as some of the ongoing projects.

'It is for these reasons that government is creating all opportunities and other social intervention programmes that will allow the youth to develop their potentials to the fullest,' he said.

Dr Vanderpuije reminded the electorate that the country is preparing for election in December and urged them to retain President John Mahama to continue with the good work.

Mr Elvis Afriyie Ankrah, a Minister of State, urged the community members to own the playground/gym and exercise regularly to minimise lifestyle diseases.

He assured the Turkish Transit Group Company Limited that the facility would be put to good use for the benefit of the children to develop their talents.

He advised those with the 'pull-him-down' attitude to stop the practice and focus on things that would move the nation forward, adding that government is committed to improving the living conditions of the people.

Mr George Kum Ning, the leader of the Turkish delegation, described Ghana as 'a vision star in Africa' hence their decision to invest here. GNA